There was a double bill of bands with American roots at the Sixmilebridge Folk Club Festival last night. From Eunice, Louisiana, via Paris, Sarah Savoy  brought her blend of cajun, country and rockabilly to Sixmilebridge, Co Clare last night as part of the.Shannonside Winter Music Weekend The Francadians are a very photogenic group and look the part. Front woman  Savoy,  was  an imposing presence with a strong sassy contralto voice and the boys, while not quite as handsome - well they had great hats.  The band lacked a drummer   (a plus in an intimate venue)  but were sorted in the percussion dept by a very young cherubic triangle player who despite her small stature, upstaged everybody in the band. 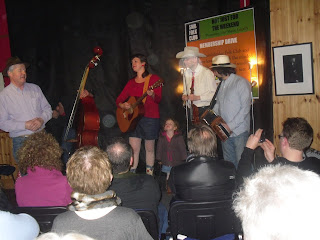 The first thing that must be said about this gig is that it was unamplified apart from a small unobtrusive  microphone suspended from the ceiling to aid spoken links. This meant there were no unsightly metal stands acting as a barrier between performers and audience. This is so rare that it deserves special mention and added enormously to the pleasure of the evening. (Other artists  /promoters in suitable venues please copy!). Vocals were shared between Savoy and excellent accordion player David Rolland. Cajun bands  are a  something of a novelty in the West of Ireland. Not since the Red Stick Ramblers played Glor, Ennis in 2009, (who I believe also have had  a Savoy from Eunice  in their line up), has their been cajun music of this quality in the Clare. The songs, as Sarah said in her terse, wry introductions are mostly about drinking, being broken hearted or hung over.  We were not really a hooping and hollerin' type of audience and the set does lend itself to dancing  with waltzes and polkas a mainstay of the set list including the wonderfully alliterative, Eunice Two Step. The usual hospitality of tea and cake was served between the sets, again another remarkable feature of this venue.

It was Ladies Night at the SMB as The Francadians  were preceded on stage at the Courthouse by the Mary Stokes Blues Band  with a line up including accoustic  bass guitar, accoustic guitar and harmonica.  Brian Palm used very wide hand waving  in his harmonica  technique. There was a easy sense of camaraderie amongst the quartet and the vibe was quite mellow.  Photographer  and musician, Christy McNamara's impressive collection of striking black and white images featuring traditional musicians were hung around the room. Christy, still glowing from his warmly received gig with Rick Epping in Crusheen last week, was in attendance himself and  took the opportunity to try out Rolland's accordion made by Sarah's father Marc following the gig .


The Winter Music Weekend continues all weekend.  WMW.ie. in various venues. My review of 2011 here.