The University of Oregan Chamber Choir Winners of Fleischmann Trophy 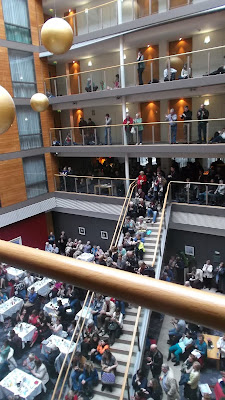 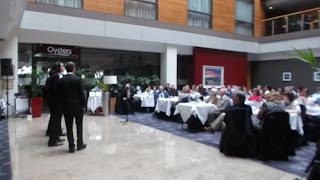 With festivals re branded under the catchy new  title of Gathering,  Cork Choral Festival continues to do  that better than most. Founded in 1954 as part of An Tostal, a government initiative to boost Ireland's failing economy, Cork International Choral Festival is the longest running Irish  festival in its' original form, Chairman John Fitzpatrick reminded us at the closing gala. Over the weekend, song seeps out of the formal concert venues to permeate spaces all over the city.  Here is my selection of Sunday's highlights.

Afternoon in the Atrium The afternoon slipped away pleasantly  at the Clarion where  MC Colin Nicholls kept procedings moving along in cheerful fashion. With ground floor table seats in demand,  patrons ascended to the balconies to hear  the ten choirs  which included several barbershop quartets . Our favourite was Polyfonica, a choir from Belarus which  had a fiddle player and included Kalinka in the set of folk songs. 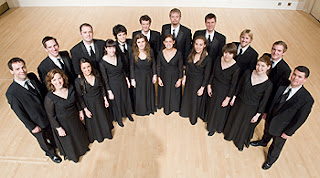 An Unclouded Day.  The University of Oregan Chamber Choir came to the platform at the closing gala concerts anointed as best in festival 2013. Would they have that special something that  set them apart. They did. It was elegant simplicity. Choosing two pieces in a spiritual vein, one traditional and a modern number, (The Road Home by Stephen Paulus), in contrast to most of the other choirs, they simply sang . No busyness. No actions. No clever vocal clucking  noises. Just seamless unadulterated vocal harmony.   Dressed in sober grey suits and dresses, the mixed voice chamber choir under director Dr. Sharon Paul, created a serene and heavenly sound that made me long for an encore. Of the novelty pieces, the French choir, Alter Echo, did make me chuckle with their stylish dynamic performance of The Ferret. Delightful also was the clarity of diction from  of the English ensemble Coro. Ceoltoirí Muscraí under director Martin Power presented an attractive and varied show case of Irish song and dance.


Organ Postlude at St Finbarres . We did a bit of singing ourselves as the choir had a rare evening off evening duties after the Sacred Music competition. We specially enjoyed Malcolm Wisener's playing of a postlude by French composer Pierné on the organ at St Finbarre's Cathedral at the close of Evening Prayer Service for Rogation Sunday.


Festival Club What did the choristers do at the wrap party. Carry on singing of course -and  dancing. At the Clarion, the more energetic made their way to céilí room where visitors seemed to have no trouble picking up the steps of Falla Liminí. In the lounge, Jack O Rourke, piano player extrordinaire from Oregan anchored the sing song around the piano, backing all comers and filling in during lulls although  in my opinion the  French delegation proved to have all the best chansons.


Best Buskers  It is quite a while since I've seen a melodica. The last one was worn by Sr Pius when I was in 2nd class. New kids on the block The Sub-terraneans include it in their arsenal snapped here on their first outdoor busking session on a lethargic Monday after all the singers had departed. 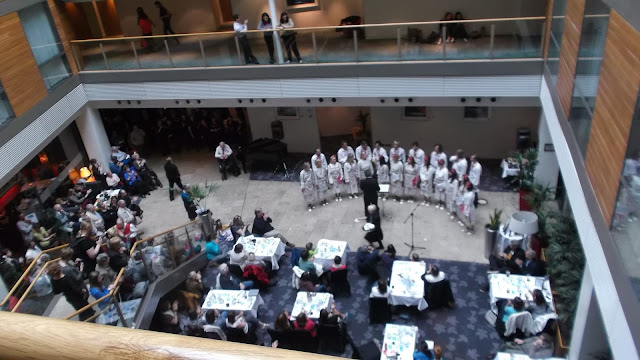 Posted by Cathy Desmond at 9:19 AM