A Homecoming Hug with Pierce Turner 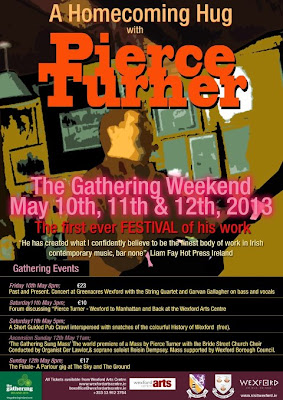 'A  mixture of O Riada, Wexford mumming and classical music' was how Fr. Aodhán Markham summed up the elements  in a new Mass composed by  Pierce Turner, heard at Bride Street Church as a pinnacle of a weekend  of events featuring the Wexford musician. That the acclaimed  singer songwriter sees his canvas in a global context is apparent in the listing of the event as a 'world premiere'.
The church was full with a mixture of regulars, local dignitaries, family& friends and fervent atheists to hear the work sung by the Bride Street Church Choir with organist Ger Lawlor, soprano Róisín Dempsey and the composer on keyboard. 'Powerful and beautiful' were the comments on the featured Communion piece, Union, composed  to commemorate the 1798 Rebellion and recorded by Kathleen Tynan. The work included a gathering hymn, parts of the Mass Ordinary in Irish and Latin and a setting of the Our Father.   It may not be very rock and roll but Turner has always acknowledged church music as a major influence  on his musical style both in interviews and in song. No gig is complete  without a sing along rendition of  Faith of our Fathers as a coda to his song 'The Sky and the Ground'* and thus  ended The Gathering Mass.  It is
surely a measure of the extent to which Turner is cherished in his hometown that a pub is named after one of his signature songs. 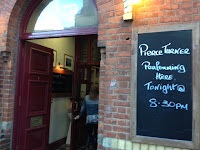 The weekend kicked off with a performance at Greenacres Art Gallery by Turner accompanied by string quartet and bass. Moving from piano to guitar and keyboard, the set list included old favourites with songs from his new album, Notes for a Verry Small Orchestra. The age group was 50 + and the mood was   oddly  reverent in the white walled gallery space.  We shuffled to our feet  for the closing numbers, the charge led  by a lady on crutches almost like a scene from a Christian Revivalist meeting. The excellent string quartet, fitted with pick ups added a lush element and the arrangements are reminiscent of Beatles Sargeant Pepper with a touch of Handel.  Among the devoted  fans who had travelled a distance for the event was Mo Maloney, a regular at Turner's Manhattan appearances who was at the gig with his son Michael. 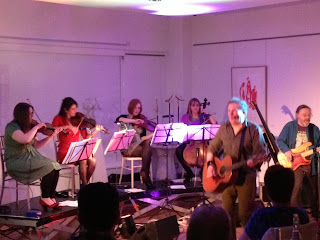 We're not in obscurity, but we're not top of the pops either' . So said playwright, Billy Roche somewhat ruefully at the  forum on Saturday .  Turner gets great press being  generally referred to as being an unorthodox genius with his name bandied about with those of literary giants, Beckett and Joyce for the quality of his lyrics .  A flick through his biography sees him photographed with  the likes of Pete Seeger and Phillip Glass- major figures from stylistically very different musical worlds.  Why he continues to fly under the radar of national consciousness, remaining relatively unknown  outside an ardent but modest fan base is something of an enigma addressed by the forum on Saturday titled 'From Wexford to Manhattan and Back'. Chaired by Jackie Hayden of Hot Press, it opened with the screening of a short documentary by Colin Murnane. Billy Roche spoke about growing up in Pierce's extended family with wry self deprecating humour. Broadcaster Frank Phelan is probably Turner's most passionate advocate and you can hear my audioboo with Frank below. Editor of the Wexford Echo, Tom Mooney drew comparisons with Julie Feeney and spoke about the impact of the changing nature of the music business.


Critic, Liam Fay completed the panel. 'The most intrinsically Irish artist of our generation was his assessment. . While the panelists were well informed and made interesting observations,  no interaction from the floor was encouraged  as advertised.


For me Turner is a quixotic figure, An engaging live performer who somehow combines elements of a cosy parlour party with big stadium shapes. He takes the details of his life story from his early life as a working class boy, growing up in a musical family in an Irish coastal town, to his journey to  America and weaves them into  an eclectic and entertaining song set. The style  veers  from  sophisticated introspection   to cheerful  schmaltz, interlaced with great yarns. His  sense of  glee and  joie de vivre  is rare and very appealing.

Turner has a few dates coming up . He will be in Coughlans,  Cork on 23 May . More information on the website www.pierceturner.com

*Correction. The hymn Faith of our Father's is sung at the end of the song You Can Never Know, not the Sky and the Ground as stated. . Both songs include references to religious symbols.

Related  articles Hawley and the Savoy and Turner Pierces Gloom

listen to ‘Frank phelan’ on Audioboo
Posted by Cathy Desmond at 12:24 AM