The Unthanks at National Concert Hall 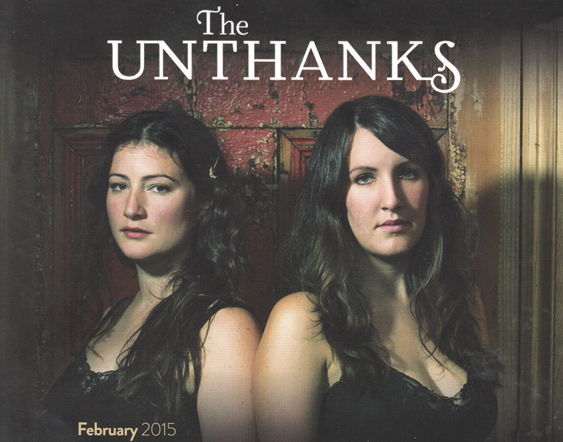 A quick google scan of The Unthanks threw up an image of two singing sisters under an English folk label. That should make for a pleasant mid-week evening’s entertainment, I thought. It was that and so much more as Rebecca and Rachel Unthank (yes- that is their real name) and their entourage  converted the grand auditorium and foyer of the NCH into a folk club with a set that combined the simplicity of  folksong with elegant skilled  arrangements. All that, pretty frocks and clog dancing too.  What more could you ask for!
The evening kicked off on a  manly note with The Miner’s song by Billy Bragg from the rousing voices of the YoungUn’s,  an acapella male  trio from Stockton on Tees.  In a change to the usual support act format, the young men in their Ireland debut opened each half with a short set.  (Festival promoters, snap them up. They were terrific and went down a treat with the full house at NCH.)
The ladies  arrived on stage accompanied by an impressive 8 piece band comprising a string quartet, bass, drums , trumpet and piano/auxilliary stuff . Dressed in pretty 50's style dresses, they had a air of quiet confidence rather than extrovert flamboyance. At the core were the songs, mostly on the melancholic nature ranging from imaginative versions of traditional songs  to re-workings of modern originals.  The vocal delivery was simple and unpretentious .  Each number sounded fresh and different from the other  due to the sophisticated arrangements drawing in  a range of techniques from contemporary classical and jazz idioms, largely the work of director and pianist Adrian McNally.  Long sustained  lines on trumpet,  biting dissonant harmonies  on strings, a shrutie box drone added to a sparse chordal piano scaffold,  were just some of the elements that added colour to the vocals at the heart, but never usurping them .  A familiar traditional song, Golden Slumbers sounded newly minted in McNally's  treatment
In a rare instrumental number,  reminiscent of Gerry Diver’s speech project,  fiddle player Niopha Keegan added her own slow air to a voice over of a recording of her father in a conversation with his musician  daughter  as a child. The second half moved to more modern material including re-workings of songs by King Crimson and Anthony and the Johnsons.
The group worked hard both on stage and off as they assembled in the foyer in the interval and after the show to greet their fans. The audience were not, I suspect, a download generation and long lines formed to take home a signed recording. Their fairly hectic schedule takes them to a different city almost  each day over a two week tour , I marvelled  not only at the excellence of the musicianship but also  their energy and cheerfulness as they  greeted  many ardent fans. When the audience leapt to their feet with alacrity to show their appreciation to the Unthanks and their splendid team, it seemed like everything else during the evening; natural and unforced.

Posted by Cathy Desmond at 4:01 PM