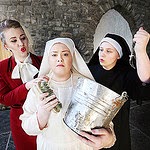 It is decades since I was at the Abbey.  The brick and concrete exterior seemed even drabber and drearier than I remembered. Arriving at the studio space, the Peacock Theatre in the basement had the feel of descending  into a bunker.  However, once the curtain  went up on Suor Angelica, all such misgivings disappeared as the young performers of the RIAM drew us into the tragic world of  Pucccini' s Angelica, a young aristocrat  banished to a convent on the birth of her illegitimate son. The production by Lir Academy sets the story in a Magdalene laundry with a resonance in 50's Ireland.

Opening with muted strings, the 12 piece orchestra under conductor Andrew Synott, sited in one of the wings were excellent  and all the nuances of timbre were clearly heard. In the absence of double bass, Sarah Lockart was an assertive anchor and there was fine virtuoso playing from Miriam Kaczor on flute and piccolo.
The singing from the nearly all female cast  was excellent.  Rebecca Rogers brought out all the pathos  in the title role  and Carolyn Holt as Angelica's stony  aunt gave good dramatic account of her roles. Sara di Bella brought a nicely done,m comic element to Sr Genevieffa .

The buzz continued in the bar for some time post show as the patrons  gathered to greet the young performers. There were many leading lights from the arts world including Dr Veronica Dunne, grand dame of Irish Opera scene.

You can get a flavour of the evening in my post show interview with Rebecca Rodgers in the audioboo below.