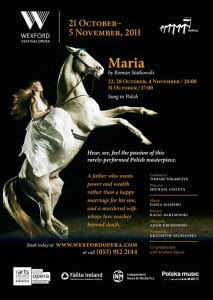 Having successfully dipped into the  fringe events earlier this week I returned to Wexford Opera House for one of the main events and attended the last night of Maria  by Polish composer Statkowski. Some very  useful context for the opera was delivered  by assistant director Jack Furness at the excellent  pre show talk.  We learned that Maria was based on an epic poem of 'dire pessimism' the only known work of the poet. Statkowski wrote only two operas and this was the first time the work was heard outside Poland where it was infrequently performed.  So, altogether,  perfect programming by artistic director David Agler  in the 'overlooked rare gem'  category cultivated in Wexford programming.

Polish  director  Michael Gielata has updated  the plot from 17th century to  1980's Poland, the era of Lech Walensa and Solidarnosc, and as a device it works very well  most of the time. (However, there is an amusing moment when Maria sings of welcoming back her valiant hero by stringing up her lute and singing moonlit laments which might be a fun time in 17th century  but  unless it is slang is unlikely to have your 20th century warrior charging back from the frontline!). Like Gianni Schicchi, it features ennui  at marriage outside social class with country girl Maria, daughter of a lowly civil servant considered an unsuitable match by the vain glorious father in law, Count Palatine, who orders her to be abducted and disposed of by his henchmen.  The first half finishes with a party scene with all the men in military uniform and the women in maxi dresses and hairdos familiar from photos of memory lane columns of any local paper digging through the late 70's early 80's archive. There are folk dancers in Lithuanian costume and the the party goers awkwardly disco dancing to the romantic orchestral music used the dichotomy between original setting and staging to good comic effect.

The production uses superb black and white stills featuring austere images of  1980's Poland to great effect. (Apparently the Polish ambassador recognised his own face in one of the stills). The second act  violence was very imaginatively conveyed with a video inset but went on a tad  longer than  necessary.  The singing was of a high standard as you would expect but two performances stay in the mind. The Polish tenor Rafal Bartminski was very impressive as Maria's  lover and the ghostly Waif played by Eleanor Jean Greenwood in concentration camp garb, striped pyjamas and head shaven,  appears in two haunting scenes. It is the waif that tells Vaclav the awful truth about Maria's death  followed swiftly by his suicide in order to be reunited with his beloved a la  Tristan and Isolde or Romeo and Juliet. I was slightly disappointed not to see a ghostly image of  Maria galloping by on a white horse at this point but the only large white animal making an appearance was a bear costume concealing a bunny girl in the party scene.

The orchestration is rich and  played against the black and white images gives  an early Hollywood film score vibe. One of the highlights is a hymn sungs acapella  in unison by the male chorus before they go off to battle .

I am fortunate to have attended  a number of opera events over the past year  around Europe and   Wexford was the  most formal. Dress suits appear de rigeur (even in the cheap seats) and there were  lots of really nice frocks.  (My brother some years ago arrived in Wexford and  thought he would take in a show. Being without the appropriate attire, he visited the local Oxfam shop where he was kitted out in fine style. Wexford is that kind of town.) Several former  government ministers,  were among the attendees and well they might enjoy the fruits of the large state funding for the project. Despite the promotional rates we saw  very few under 35's and the audience seemed to be mostly retired senior folk. The challenge for the Wexford Opera, now more than ever is surely to to broaden the demographic of its audience. Tickets are relatively pricey*  but  the production values are unquestionably   top class.

I do  feel incidental  expenses were excessive;  the festival programme pricing was high (€20) and  if you fancy something sparkling, a glass of champagne was rather too expensive at €16 for a glass and the more reasonably cava referred to in my blog post for 2010 seemed not to be on offer either in  the Opera House or White's Hotel.

I brought along my tape recorder and recorded the thoughts of the people I met - see below.

We enjoyed our trip to this prestigious musical offering and we look forward to returning next season.

Posted by Cathy Desmond at 6:29 PM