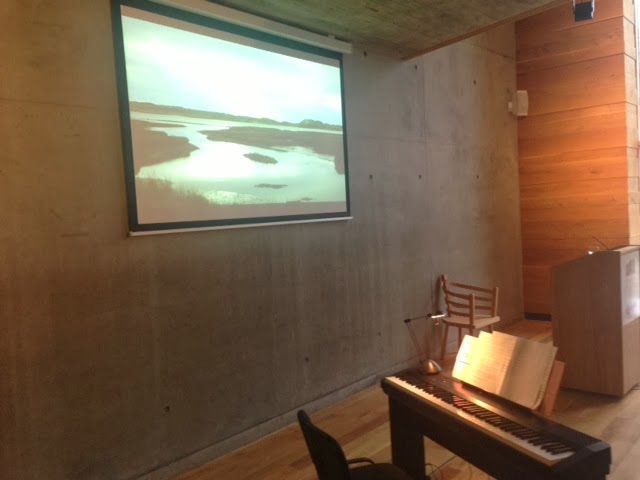 You know how it is. You wait ages for a WAM event and then two come along at once. I am using the acronym for that multifaceted style of event where live  musical accompaniment and projected artistic images are presented to enhance the spoken word of poetry and soliloquay. There were two such events on Sunday in Waterford. Both were quite absorbing in different ways and both took their inspiration from the county of Waterford.

In The Backstrand in Concert, Mark Roper read extracts of his poetry and prose from a recently published book, The Backstrand as images  by photographer, Paddy Dwan also from the book, were projected behind the speaker. The readings  were punctuated by interludes on electric  piano played by Eric Sweeney. The musical style was minimalist, unruffled, reminiscent  of Satie's Gymnopedies.
The aerial shots were stunning giving us a fresh perspective on a spectacular resource on our doorsteps.  The Garden Room in the Medieval Museum was full for the event with many staying on for the Tricolour ceremony in the afternoon.  You can hear the cheerful sound of the Thomas Francis Meagher Fife and Drum Band as heard on the day in the audioboo below

Lackendarra Jim from Rigout Productions was an extended bilingual monologue accompanied by live music  telling the life story of a shell shocked WW1 veteran who lived  as a hermit  in the Comergh Mountains.  Paul Dillon's, Jim came over as a gentle  fragile creature as he recounted the poignant tale of a West Waterford childhood, his traumatic  experiences of  war and finally his  contentment in living a simple and solitary life in a cave near Cumshingaun Lake.

|A septet  circled the stage and provided an aural backdrop of improvised sound in a folk idiom. Added to piano, bass and drums were whistle, harmonica, guitars The presence of a  small shrutie box reminded  me that the ancient Greek rhapsodes recited the epic tales of the wanderings of Odysseus to lyre accompaniment. The musical activity did at times overpower the monologue and  were microphones for all players and actor necessary in such a small venue? Lorcan Reidy's low whistle stood out from the aural canvas.

The projected brightly coloured images from drawings by Mari Lynch picked  up the themes of natural beauty and the trauma of war. A silhouette in a foetal position rimmed in jagged red recalled the iconic cover of Brian Keenan's 'An Evil Cradling' .

The evening opened with a set from Rua , an acapella vocal trio featuring  Cliona Lily and her cousins Cathy and Treasa Forristal. The ladies  had a very pleasing and secure vocal sound in a set of traditional and modern Irish songs. They seemed more comfortable singing than  in navigating the stage banter aspect of performing and appeared to take cover behind a tall music stand.

There was a clubby atmosphere in the venue which was sold out for the two night run with a gathering of friends and supporters.  The post show theatre chatter  went on long after the show in Jordans Bar where Eileen Hayes and Michael Power reminisced about Lackendarra Jim from their own childhood experience of growing up in the Comeraghs.

Jordan's Rigout is a collective of players that  jam regularly in Jordan's Bar  on Tuesday nights. The style is eclectic, with an emphasis on  Blues, Americana and Irish folk. There is always plenty of fine  instrumentals and vocals and  tends to build to a good old fashioned sing a long towards the end of the night. On a recent visit, Paul Dillon's rousing rendition of 'Smoke that Cigarette' brought everyone to their feet.