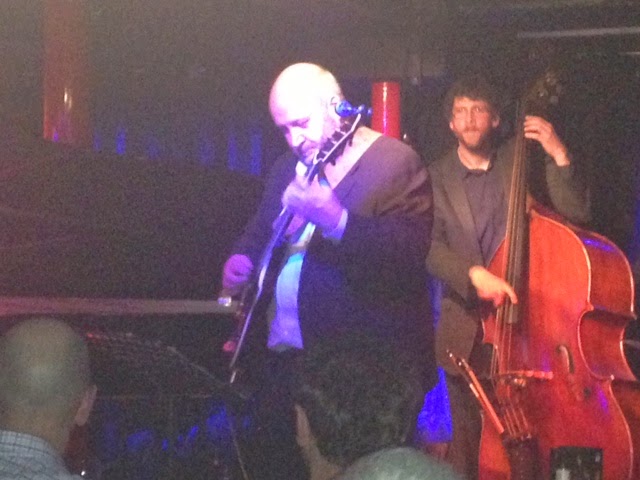 Soho is always  hive of activity. Early morning sees the food delivery vans mysteriously and quietly dropping  their cargo of goodies across the various eateries. By night, the after-work hipster crowd linger beyond the planned quick pint-after-work and commute.

Pizza Express where Dean St. brushes Oxford St delivers live jazz most night with your favourite topping on a thin and crispy.

It's a basement venue below a conventional pizza restaurant.

I secured the last of the tickets for the Larry Willis / David O'Rourke Quartet. You pay your entry fee, order a pizza and beverage  and enjoy the gig.
What a gig!. Larry Willis has a jazz pedigree that  must be head-wrecker for those who write programme notes. Simply, he's played with everybody and even had a stint with the '70's group Blood, Sweat  Tears.

Guitar player David O'Rourke is an Irishman based in the US. Originally from Malahide he was introduced as a orchestrator and arranger. He plays a mean jazz guitar in the Louis Stewart mould. After you get over his uncanny resemblance to Fergus Finlay  you realise how great a guitar player he is. The set list  was stuffed with  mellow easy listening and even included a snippet of Mountains of Mourne for the city that was in it!

To my liking, there was little chat during the set just a few brief intros and the music did the taking

Stephen  Keogh played drums and Jeremy Browne on the bass completed the quartet.

John Hartery  - Guest Blogger
Posted by Cathy Desmond at 10:42 AM