His was an earthed universe....
When he played
he seemed
to gather up
the notes
that cascaded down
from
his timber flute 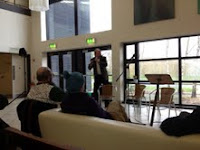 from Flute Player for Des Mulkere

The Clare Poets kept the flame  burning at the monthly poetry vigil in Glór Foyer on 16th February . The featured poet was founder member Brian Mooney . Sadly Brian was indisposed but his daughter Cora read beautifully  from his work. Some of the lines had a particular resonance as special guest  was  Des Mulkere for whom Brian wrote Flute Player quoted above.   We heard Danny Boy and the Last Rose of Summer  and Des , a farmer and musician  knitted a number of threads in his discourse delivered in a rich sonorous voice-the Kiltartan Irish and his family's association with Yeats , Denis Hempson and the Belfast Harp Festival amongst others.  Mike Douse was in the chair  and added a note on John McCormack's recordings of Moore's Melodies. There was a lively open mike session with regulars and newcomers. I enjoyed  Pat Considine's ,The Waking Field and Patricia's eco conscious poem on Fracking, both attending for the first time I believe.    The always impressive Peter Kay picked up the WB thread with his  performances from memory  of  Bulla .  We had a  poem as Gaeilge from Pat McNamara and poems from Arthurs Watson and Joe Cronin.
The Clare Poets meet in Glor, Ennis on the third Saturday of each month. All are welcome, poets or hearers.