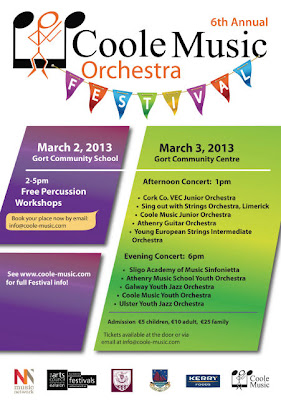 Coole Music School hosted their 6th annual orchestra jamboree  on Sunday 3rd March in the Community Centre Gort.  Sonic Strings, a dancing violin troupe kicked off the proceedings in jazz style .   Junior ensembles from Co Cork VEC , Limerick's Sing Out With Strings, Athenry  and Young European Strings Dublin joined the home team to present an afternoon concert. After a splendid and varied afternoon all ensembles
surrounded the audience as musicians lined the hall the four lengths of the hall to play a final ensemble  piece in unison and in canon specially composed for the occasion by Coole Music director Katarina Baker . A special feature were  strategicaly placed chime bar players linking all the groups together.

Féile na hInse is a festival dedicating to promoting Irish language and culture held annually in Ennis . It consists of a plethora of competitions over 8 days. with over 2,000 young people involved each year and over 70 schools, both primary and Second level, participating. I went along last Tuesday to hear some of the competitions. How wonderful to see the art of  singing being nurtured in the very young and there was a large entry in the Comórtais Amhrámíocht Aonair  from  primary schools across the region.Songs like  Mo GileMear, Dilin o Damhsa, Dúlaiman and  Beidh aonach amarach, an Poc ar Buile, Ailiu Eini, Trasna na dTonnta were delivered by the cantoirí óige. Some of these songs I haven't heard since I was at school myself and  it was heartening to see the tradition of Irish song being preserved by primary school teachers.
It was notable  that a range of cultural backgrounds were represented among the contestants.

Frank Custy adjudicated at the Grupa Ceoil competition awarding prizes to Annagh and Barefield national  schools after pointing out that several groups had omitted the fonn mall in favour of a port mall,  -fonn mall being a  slow song air whereas port mall being a slow jig tune, I believe. The grupa ceoil format was laid down in the 60's by Sean O Riada and is essentially a sequence of tunes and airs presented by varying combinations of solos and tutti with melody and harmony parts.There was some terrific mature playing from the young musicians  Here is the winning group from Barefield NS .