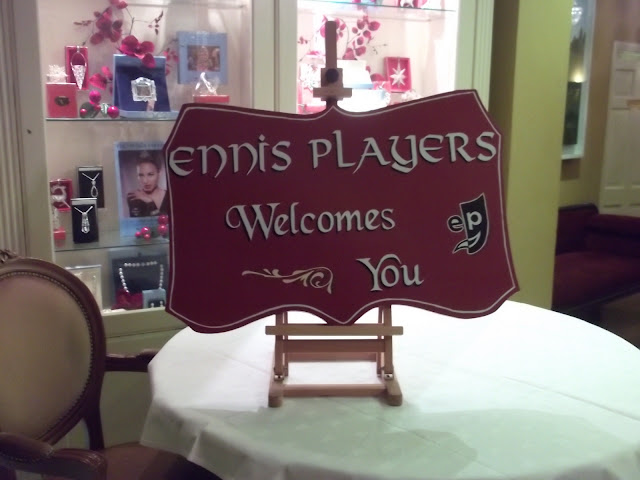 In the current economic climate it takes quite an effort to get a crowd of 150+ to come out of a wet November evening. This  is a feat the Ennis Players managed several nights this week at the Old Ground In Ennis. Gathering around to see live bodies assume alter egos to tell a story has enduring appeal and  on Wednesday  night, the large function room   was packed  for the amateur dramatic society's latest offering. This was  the 26th season of the Ennis Players' 'Supper Theatre'. The format is a good one, it entails 2 or 3 short one act plays followed by a supper where one can dine and discuss the performance.Sitting in the Old Ground Hotel  bar always has the feel of a theatrical experience for me with an ever changing cast of 'characters' entering and leaving stage left and right through the doors at each end.

This year's production was 2 one act plays. The first was in the style of Miss Marple or Agatha Christie where the plot  had the giveaway title of 'What Shall We Do With The Body?' by Rae Shirley. This was a three hander comedy  with Carmel Quinn playing the crime writer role of Miss Temple and Ailbhe McMahon as her new new assistant, Miss Worthington. Tony Coffey was the Man visitor. The second play was The Way of All Fish by Elaine May and directed by Joe Varden and I felt this was the stronger piece of the two. This was a 'power play 'between a boss and her assistant. Amy McEnnis captured the New Yawker accent wonderfully as the macho boss whilst Bairbre deBarra delivered a fine performance as the mousey employee who harbours murderous intent.

The supper component of the evening was excellent with the Old Ground staff working wonders to deliver top class food to the many at the same time.

An excellent evening for €15 and  I look forward to Ennis Players' production of a Martin McDonogh play in the New Year and their endeavours on the thriving amateur drama scene.  Meanwhile the Players are hosting the All Ireland One-Act Drama Festival 'Drama in Ennis' from 2nd to 4th December
Posted by Cathy Desmond at 11:08 AM