It is a feast or a famine and this week, not one but two new professional theatre productions opened in Waterford venues. My review of a Eugene O Neill revival at the Theatre Royal is posted here. At Garter Lane, there was that rarest of theatrical events - a world premiere of a brand new play. Better still, one with a living playwright in the house, a real set, a convincing cast of characters on stage and off  and a plot with plausible contemporary moral dilemmas.

Jim Nolan's new play was eagerly anticipated and the consensus among opening night punters was that it lived up to high expectations. Set in a provincial newspaper office with a raggedy band of hard pressed hacks in the throes of being  taken over by a hard nosed media consortium, it weaves in a reference to WW1 and  a dubious 1916 commemoration thread. The title I understand comes  from a thread where a report on a damaged war veteran is sanitised  to present a  shinier happier version of history. As ever, Nolan's  dialogue is fast paced, witty and rings true- a feature confirmed by several of the local pressmen present from the News &Star and Munster Express.  Many of the other Jim Nolan hallmarks are present; the redemptive power of amateur choral singing, the Sylvie style declamatory monologue towards the end, a cast of recurring offstage characters. 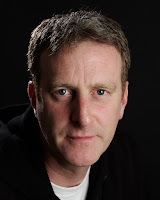 Although serious issues were at the core, there was much humour in the day to day work-room banter and the first night audience laughed heartily throughout. There was a strong performances across the ensemble. Michael Hayes is familiar from the TV adverts for a certain phone company, (yes the one with the Sue the pig in it). His  culchie mammy's boy, Lenny Harris could have been downright corny but it wasn't. Lenny won us over and we laughed with rather than at him. Tall and imposing, Ciaran McMahon was arrogance personified. Jenni Ledwell was a matronly pragmatist and the veteran Abbey actor, Garrett Keogh the flawed hero/ deputy editor making a final principled stand . Ema Lemon made her professional debut in the role of  eager junior reporter, Lisa Reilly. 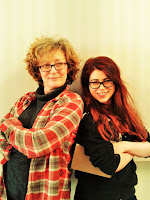 There was a air of civic pride in the local provenance of the event. Critics from the Irish Times and Independent attended along with  journalists from the local press. Best dressed man was Liam Murphy,  looking dapper in navy blue pin stripe. 'Yes indeed-the occasion of a new Jim Nolan play deserves no less', the arts critic of the Munster Express quipped. Waterford Blackwater No 5 Gin served at the interval was a treat. A standing ovation rolled into a tribute to the late Richard 'Tich' Meagher. After the show , thespians, crew and patrons repaired to recently reopened Tully's Bar (formerly McLoughlins)  across the road to mull over the evening.  It was like old times.