I came across English folk troubadour, Reg Meuross  at a gig in Sheffield last year and found his gentle understated style and thoughtful lyrics  very beguiling. Hearing that he was on an Irish tour, I made a beeline for the final evening at the Upstairs Room at the Lord Edward Pub in Dublin. It was a rare and wonderful evening when artist, environs and  audience all seemed be chime to make a harmonious  experience on many levels.

First and foremost, the artist; with his mahogany hued, Mariachi style guitar held high across his chest, Meuross, singer and raconteur took us on a journey  through his well crafted songs and engaging stories laced with a wry self deprecating humour drawn from his life as a travelling troubadour. We heard songs from his back catalogue and some from his new album, December. Historic figures - pilgrim fathers, suffragettes , highway men, Wallace Hartley, the Titanic violinist turn up with figures personal; to Meuross. An encore 'Good With His Hands', was a moving tribute to his father who was a carpenter.What made the performance all the more thrilling and remarkable was that it was delivered without the aid of an amplification. Sitting quite close to the singer  I noticed his extra long nails. Wouldn't  18th century harpists have killed for  acrylic?. 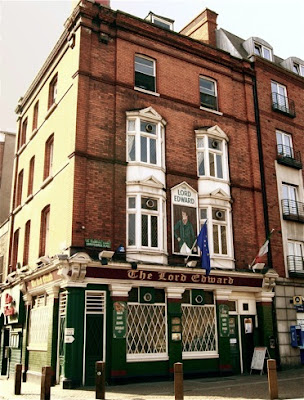 The venue: The  famous Tavern is named after Lord Edward Fitzgerald who was the 5th son of the Duke of Leinster, C in C of the United Irishmen, who helped plan the Abortive Rebellion of 1798 against the Crown with Robert Emmet, Wolfe Tone and Napper Tandy. The upstairs room,   a cosy  space lined with leaded windows looks across to Christchurch Cathedral whose bells added an occasional counterpoint to the proceedings.

When we were greeted warmly on arrival  by our  host, fear an tí,  Peter Grogan. This is rare enough to merit mention. One of my pet peeves is being greeted by the staff at my local arts centre who peer at a computer screen and ask me yet again 'Have you booked with us before'? No-' hello, nice to see you' Aaagh!

Peter hosts a regular monthly folk session at the venue on the first Tuesday of the month. The pub houses a seafood restaurant and Beshoff's Fish and Chip Shop is next door.

Posted by Cathy Desmond at 8:58 AM