A Moon for the Misbegotten Irish Premiere at Theatre Royal 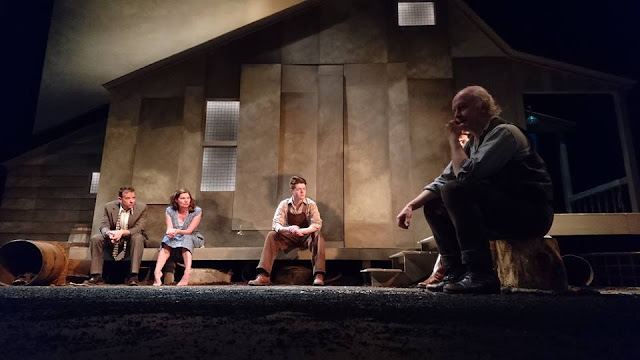 James O Neill sailed to America from the South East of Ireland in 1850 where he had a successful career as an actor. So it was fitting that the first professional production of a work by his famous son, Eugene should have an Irish premiere in Waterford. Luminaries from the Irish theatre scene and local arts and business community turned out to fill the house for the opening night of A Moon for the Misbegotten directed by Ben Barnes at the Theatre Royal last night.

It is a play of two halves each focussing on a relationship between a trio of central characters. In the first act we meet Phil Hogan, Irish American tenant farmer a father figure from the Big Maggie stable of frightful parents. Having dispatched the last of his sons, Mike (an excellent cameo from Cilian Jacob in his first professional role), we have an extended dialogue exploring the relationship between the garrulous Phil and feisty daughter, Josie.  Mark Lambert and Kate Forbes are excellent in portraying the nuances of their roles.

Phil it appears is anxious that his farm will be sold to his wealthy next door neighbour. There is a humorous cameo from Michael Quinlan in the role of Harder who pops in to complain about Phil's pigs in his pond. The only solution it seems is to trick his genial alcoholic landlord, Jim Tyrone into a shotgun wedding with Josie. The meat in the final act is an extended late night dialogue between Jim played by American actor, Donald Sage Mackay and Josie, two ‘misbegotten’ souls whose bluster and bravado is exposed under the moonlight as camouflage for the  feelings of guilt and desolation both harbour. Mackay, a familiar face from many TV and film appearances is an imposing stage presence convincing in conveying good humoured nonchalance in early scenes and torment in Act 3

The production is visually very pleasing. Joe Vanek's tall triangular farmhouse set inspired by the paintings of Andrew Wyeth, frames the action evoking 1920's rural Conneticut.  Over the course of the play the Anne Wrightsons' striking  lighting effects bathe the set in a palette of orange, blue and sand as day turns to night. I

'May you rest in peace forever in forgiveness and peace' Josie's words to a departing Jim steer an evening of turbulent, powerful emotions to a conclusion of  peace at last.