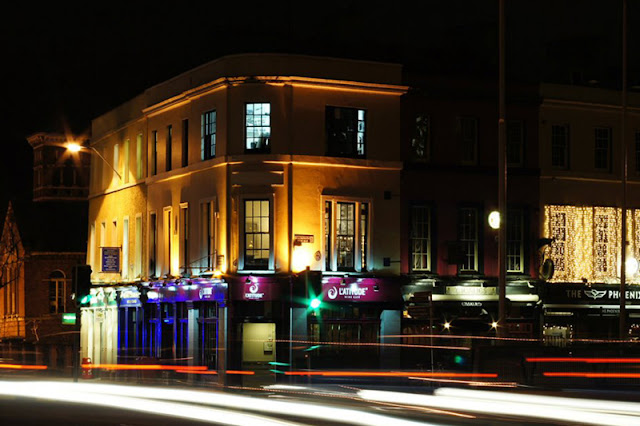 There used to be a restaurant  in London near Fleet Street called Spagetti Opera where up and coming singers would punctuate your meal with operatic arias  as a sort of musical sorbet.  A memorable and rare enough dining experience for me to remember it many years later. Although I have scanned the restaurant  lists, alas I could find no record of it on recent visits. Leaving aside the long running dinner shows aimed at the tourist market,   live performers of any description are not usually found in our dining rooms where they might be usefully employed  to create a mellow ambiance and cover lulls in  conversation when you are done ooing and ahhing over your filet mignon and applauding the theatricality of your waiter's crepes suzette.

So I was interested  to stumble on the after dinner entertainment component of a themed  evening at the L'Atitude Wine Bar on Union Quay Cork.  Titled, Cabaret Sauvignon  Drink the wine,  Hear the song, Mezzo Contralto, Amanda Neri presented a selection of repertoire from wine producing countries around the world together with a loose  narrative, relating her choice to the wine theme of the evening, to mark the Year of the Wine Geese, Her audience having been wined and dined over five courses were nicely  in the mood for a little postprandial chanson. The set list included  operatic arias, comic cabaret songs and songbook standards . Ms Neri's  sultry tones suited the Latin repertoire particularly well. She chose a nice languid tempo for the standard,  Besame Mucho and it was good to hear  The Gypsy In Me, one of the more unjustly neglected numbers from Cole Porter's Anything Goes. She was backed by a quartet of young musicians, The Vineyards . David Keating on guitar best evoked the Spanish element in florid virtuoso accompaniments. Michael Young  gave solid  support on electric keyboard . A violin and cello added pedal notes and vamping chords with occasional solo lines.  Amanda Neri showed admirable restraint in modifying her  operatic style to suit both the intimate venue and repertoire. Both the guitar and piano were just  a tad over amplified for my taste.The presence of a   a music school a few doors down augurs well for  future evenings of  light entertainment at this classy quayside venue.

City of Cork Symphony at the Opera House  Earlier in the evening, I caught the second half of the City of Cork Symphony Orchestra's concert at Cork Opera House. I was a member of this ensemble in the late 80's under Professor Aloys Fleischmann who I think still holds the record as the longest serving conductor of an orchestra. (58 years) Seated at the back of the stalls, I regret to say the acoustic was not good and  despite the undoubted strength of the ensemble under conductor Keith Pascoe, the string sound sounded thin in a Brahms Symphony and moreover very many of the players were not visible from my seat.

Soirée avec Desaunay On the Pigs Back