A Baroque Spring Break in Leipzig

I enjoyed a few days over Easter in one of the cultural capitals of Europe.   The compact nature of Leipzig  city centre makes it easy to navigate and cover the major sites of interest.   Here are some of my  highlights.

Thomaskirche is a cultural beacon being the final place of work and rest for JS Bach and I arrived in Leipzig in time to join the congregation at the Lutheran Thomaskirche for the traditional Good Friday performance of the Johannes Passion directed by the present day cantor Georg Christoph Biller who I believe is the 16th in line since the great JS  .  The sense of the weight of tradition combined with a crammed  house and a solemnity of mood  added an intensity to the experience of the performance by the Thomanerchor  and the Gewandhaus Orchestra.  The line up included two tenors, two basses and soprano and most striking were the arias by contertenor Matthias Rexroth , in particular Es ist Vollbracht with obligado viola de gamba  played by Thomas Fritszch.
At the close, there was no applause as the house dispersed quietly in sombre. mood. 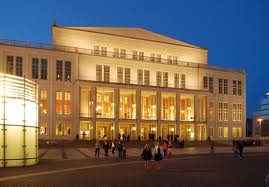 Cinderella at Leipzig Opera House  It is an indication surely how far down the glamour scale airline travel has fallen that  Cinderella's trial is not drudgery of housework but having to endure flying on a certain budget airline (blue uniforms Ryanair perhaps?)  before she is bumped up to champagne quaffing first class with the handsome prince.
The opera house is a modern  building, the original  destroyed by fire was rebuilt in 1943 in a neoclassical style. Large and comfortable, it has expansive foyer spaces and an abundance of  gilt lined interior surfaces. There was a family audience in for a teatime performance of a new ballet based on the Cinderella story.  The score was devised from the back catalogue of Prokofiev. The audience didn't seem to fully engage with the drama until the second half, (maybe due to the device of a foray into the audience by by the royal henchmen for shoe fitting and the walk on part for a small dog) 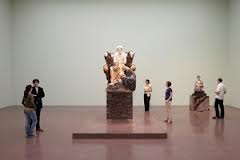 Museum of Fine Arts
A huge sculpture of Beethoven by Max Klinger  is given pride of place in the Leipzig Fine Art Museum.  The teutonic titan has a room all to himself and  is depicted  as a god enthroned on Mount Olympus. The galleries are enormous high ceilinged spaces with works from a range of periods and it made a good place to shelter from the snow on Easter Sunday afternoon.

Morning coffee recital at the Seaside Park Hotel
The Seaside Park Hotel* has lovely art deco interior with a baby grand piano in the mezzanine lobby and it was an unexpected musical treat  to hear a short programme of classical pieces played by Scottish pianist John Bryden of ACE Culturtal Tours on Easter Sunday morning.  His final piece Mendlessohn's Spring Song beckoning in the new season.  Not so fortunate was my forgetting  the time change and I missed the Sunday morning cantata at Thomaskirche. I nipped up to the gallery  to hear the final prayers and organ postlude. Judging by the printed order of service, the elements of cantata, plainchant and chorales seem unchanged since the time of Bach and all notation printed in the booklet to aid congregational involvement. As I lingered in the gallery for a final look, the organist (Herr Ulrich Bohme) came towards me and said something. Sadly my German is poor . Something profound and musical no doubt? Just that he would be locking up the gallery shortly .  It might be the most iconic organ loft on the planet but just like the previous famous incumbant, there were the practical mundane tasks to attend to.


Best Dining Experience .
The walls of the Goethezimmer in Auerbach's Kellar are adorned with painted scenes from Faust and the food served by red jacketed waiters is decent We enjoyed two hearty main courses with beers for under €40. The restaurant was fully booked from  6pm so late afternoon was a good time to get a table. 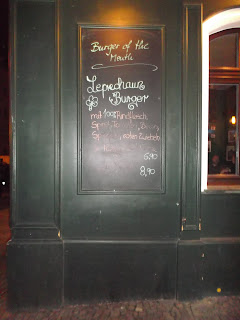 Best pub . We visited a number of venues popular with students. I liked Beyerhaus with its huge space and pool tables . I am a bit concerned about the menu choice snapped on a board outside the Irish pub delightfully named the Killywilly. Never mind the horsemeat debacle, does the minister know they are serving leprechaun burgers in Leipzig? 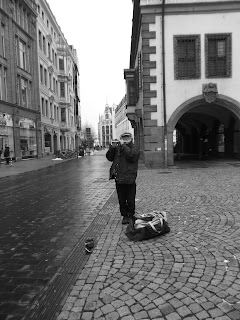 The weather being so cold did keep the buskers at bay but there were some hardy accordionists playing in gloved hands  but my favourite was this birdlike man with a bag full of assorted whistles and recorders  playing flute near the market Square.

My stay was three nights and while it was tempting to stay longer, with much still to see and do on the Leipzig Music trail , there is only so much Bach and Buxtehude a girl can stand to hear in a week and somewhat  reluctantly I moved on via coach to Berlin. More on my Berlin adventures in the next post.

*The Seaside Park Hotel had a great location across from the train station. . Do ask for a room away from street side as it was quite noisy on weekend nights.

Thanks to Gerry Murphy for his insightful travel tips on Leipzig

Posted by Cathy Desmond at 2:15 PM