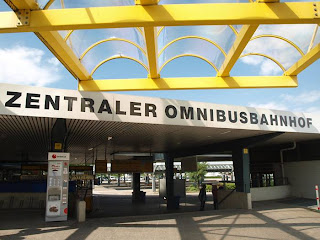 The main bus station ZOB is on the outskirts of the city  in the district of Charlottenburg and not exactly the most glamorous  jumping off point for the German capital. I spent two days in  Berlin on route home from a trip to Leipzig. Even though it was the first days of April, the weather was eye wateringly cold which seemed to accentuate the harder surfaces of the city, the modern glass and chrome structures and wide expansive streets not yet showing any sign  of greenery. These were the highlights 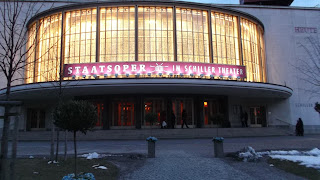 Sources suggested that Rolando Villazon et al were in town as guests of the Staatsoper so I made my way hopefully to the the lovely Schiller Theatre, Unfortunately  I and a dozen others were at the wrong venue and patrons were hailing taxis to head to the Staatskapelle.

Konzerthaus Berlin
After a peep at the modern  exterior of Deutsche Oper where Parsifal  was in train,  I made my way instead to the Konzerthaus  where the Landes-Jugend Orchester were giving a concert.  The signs didn't look promising.  'House sold out'  the usher informed  me shaking his head.  'Not possible'. However I had come too far to give up  easily and I was running out of contingency plans. I bided my time 'til the interval when a ticket was acquired courtesy of departing patrons and I was up the steps and through the grand portico in time to join the holiday audience of proud mams and dads and a sprinkling of overseas students who filled the gracious Carl Maria von Weber Saal  sipping their interval beers. The post interval programme was Shostakovic Suite for Jazz Orchestra  no 2 which includes the well known Waltz II very familiar to Lyric FM listeners. Needless to say, the standard of playing was high and the band included matching grand pianos. Conductor Evan Christ bore a striking resemblance to Keanu Reeves at least from my seat in the parterre. And quel surprise,  although the hall was well filled, there were lots of seats in the upper balconies. I liked the dimmed house lights . National Concert Hall, Dublin  please copy.


The Wall
Best coffee stop.The Berlin Wall has come tumbling down broken in pieces and scattered around the globe. This bit is part of the exhibition on on the top floor of the Kolhoff building in Potsdamer Platz which is reached by Europe's fastest lift, the Panoramapunkt.  Best coffee stop of the trip with 360 degree views of the capital.


The Philharmonie is the home of the Berlin Philharmonic Orchestra and a small queue had formed on Tuesday morning for the weekly  free lunchtime foyer concert . There were seats for those with a disability pass and  like a flock of  birds, punters  scattered for good perching points . Soon tiers, balconies and stairways were  occupied .   The programme was a sonata by Poulenc  and a modern minimalist piece .    The audience of young and old included many children on school holidays. There was extraordinary hush  in the foyer for the duration of the recital by cellist Adele Bitter and pianist, Holger Groschopp

Jazz at the Berlin Wintergarten Feeling in need of something more in a cabaret vein after all that classical music , I went along to the WinterGarten   to hear veteren singer  Bill Ramsey with the Jorg Seidel Trio. With red velvet and gold trimmings  the theatre looked like I imagined a Berlin cabaret venue should do and  I enjoyed the programme of jazz standards. The Cinncinati born singer was well supported by some terrific playing by Seidel on guitar. The pleasant front  of house staff looked the part in the their red frock coats.

The Hauptbahnhof is relatively new, opened in 2006 and building work around the station continues. In an enormous glass and chrome hall,  trains depart from  platforms on several levels. Although thoroughly modern, it lacked some of the charm and bustle associated with other major European train stations.

After the compact centre of the smaller city of Leipzig, getting my bearings in the major capital was not easy and I did find these resources useful to hit the ground running.  A paper copy of Lonely Planet ( I am not ready yet to join the electronic travel guide generation)  for general guidelines  and the Berlin Tourist Office website  for day  to day listings .  I stayed at the budget hotel chain Motel 1 at  Alexanderplatz.