Denouement of 'Drama at Ennis' - The All Ireland One Act Plays 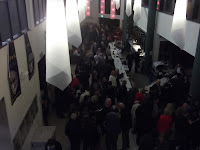 Following fast on the heels of Druid's Big Maggie, I attended another festive evening of theatre at Glór, Ennis the culmination of a weekend packed with drama when the winners of the One Act Drama Finals were announced.

Patrons were greeted by masked giant doormen a la Macnas setting the party atmosphere at the door and the foyer bar was buzzing when we arrived as thespians discussed the events of the weekend.  The first play was a rather dark tale of a victim meeting her attacker after ten  years suffering the consequences of their last encounter.  It was followed by a slice of life as observed by Alan Bennett, in a trademark exposition of the tragedy of ordinary middle class lives.  In this offering by Bray Arts,  the sense of achievement of  lifetime by  amiable retiree Dodsworth is decimated in the space of afternoon tea by a visit from  Mrs. Protheroe.

It was a pleasure to hear voices projected clearly without any amplification. MC John Finn was greeted warmly by the audiences and his drole introductions  with impeccable comic timing drew lots of laughter.  Anna Walker as adjudicator  was excellent in delivering constructive criticism with a  sense warm empathy


Tumble Circus were  bit of a slow burner and took a little time to win their audience around but maybe it was the gold spraypainted hula hoops that eventually earned them their standing ovation. This group are used to audiences standing as they are streeet entertainers after all and were a good choice to complement  the more wordy theatrical offerings.
Eventually, we came to the final act, the awards ceremony.  This was a one act play in itself, delivered with suitable aplomb to a hushed auditorium.  The vibrant painted backdrop cast a glow,  'actors' were accompanied on stage by the giant masked  figures band  to a blast of suitable music, 'Oscars'  style.  Everybody hammed it up a bit and it was all the better for it. There were speeches from stakeholders, Chairman Allen Flynn, Chairman of Drama League of Ireland and adjudicators Paul Cusack and Anna Walker.

My guest blogger who saw all the performances felt that the adjudicators had got it right, althought Two by Jim Cartwright was his personal favourite.  Overall the consensus from the experts I spoke to were in agreement with the choices and readily agreed that Disco Pigs was a memorable piece. Anna Walker made the interesting point that there is a blurring of lines between amateur and professional scenes in Ireland and some of the most relevant theatre she has seen is on the amateur circuit. Perhaps being free of the commercial restraints gives the amateur societies  more freedom to present cutting edge work.

There was a sense of glee and collegiality as whole sections of the audience hooped and hollered and jumped up and down as the results were announced and this was particularly so from the local winners Corofin Dramatic Society  With many of the participants staying in town, patrons lingered in the foyer and the place  was buzzing with post performance adrenaline as the results were mulled over.  It was great to see Glór full for every performance. It was a very suitable venue for this endeavour.  Bravo! to the  Ennis Players and chairman Allen Flynn, who were excellent hosts and worked hard to make their guests feel at home.  Next year to Ballyduff in West Waterford  renowned for a long and proud tradition of amateur drama.  We'll be there!