Last play of Jukebox Opera in the Banner 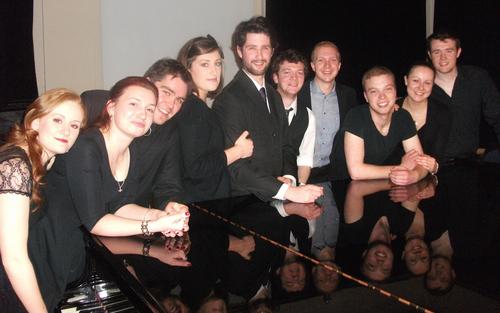 ﻿﻿﻿﻿﻿  An unassuming notice in the church newsletter informed me that there would be a some third level singing students performing in the Friary when the Dublin Youth Opera Company would perform their jukebox opera 'Blood is Thicker than Water'.  The presentation far exceeded expectation and was a sophisticated  semi-staged presentation with a variety of arias, duets and ensemble numbers all woven into a lose narrative presented with verve and considerable panache by the company just shy of 20 members, all on the cusp of professional musical careers.  Clad in jeans and black and white tops the evening began in a very unassuming fashion with the ensemble taking up positions among the audience and gradually coming on stage, flashmob style  to make up the Jets and Sharks teams for the opening ensemble number from Bernstein's 20th century classic, West Side Story. This worked very well indeed as an opener and I don't think any of us were expecting the quite sizeable enesmble of seventeen singers and two accompanists, that gradually assembled into a cohesive ensemble in front of us. 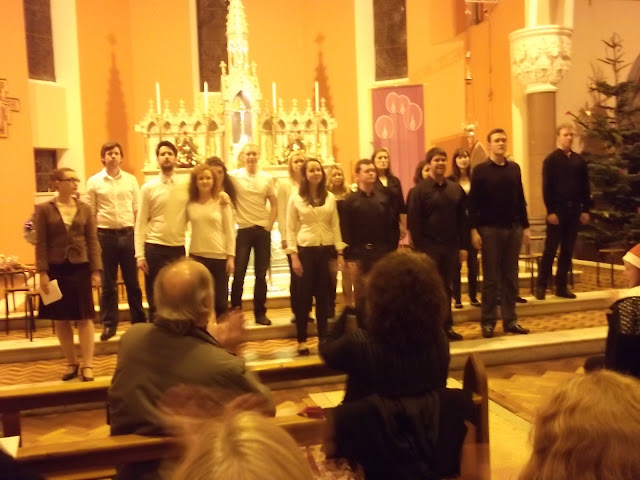 Ennis native Ruth Kelly played the role of Lauretta, daughter of Gianni Schicchi straight rather than as a manipulative young madam wrapping her father around her little finger. In the  violin duet aria , Orpheus  (Ferghal Curtis) pretends to play his latest '75-minute 'concerto' and completely ignores his wife's pleas for him to stop.  Revenge indeed for Eurydice's unfaithfulness. It was in Gluck's Orfeo that we had one of the most remarkable of  the evening's voices.  I have heard three renditions of Che Faro in Clare in the last ten days (exceeded only by a certain French operatic carol)  but wonderful as Maeve Cairney's version en francais and mezzo soprano Edel O Brien's  Italian, version nothing evokes the spirit of the grief  quite like high register  male voice. Countertenor Jonathan Gannon was an exciting new voice that I expect we will hear a lot more of with Baroque opera much in vogue. The baritone, David Howes has appeared in these pages before when he impressed in a performance of Puccini's  Messe di Gloria with Limerick Choral Union. His duet with Ciara McMackin was  really charming, the same young lady partnering Alex Otterburn in a nimble and lively Papageno's Duet . Katelyn Galvin caused quite a frisson among audience and cast with her sultry tones as the feisty Spanish seductress , Carmen.

The company had the services of two excellent accompanists, Maria  Geheran and Adam McDonagh. I had a chat with Maria following the performance who spoke about the pleasure of being part of an ensemble experience with piano playing more often than not being  a solitary pursuit. Maria is a student of Padraig O'Cuinnegáin no stranger to Ennis audiences and who recently accompanied Regina Nathan in her Ennis recital  Into the Light  . 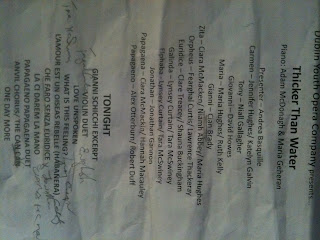 Michelle Hennessy's Junior Choir  accompanied by Leon Walsh were well schooled and sang a charming selection of their repertoire. The evening concluded with the opera company forming a choir for some strightforward  choral singing, including a lovely Polish carol,  In a Manger He is Lying.
﻿﻿﻿﻿

The clever programme was I gather devised and directed by student Andrea Basquille (first voice in the video below)  who acted as narrator today.  There was a great sense of energy with the young ensemble  clearly enjoying the camaraderie of ensemble performing which was very appealing. There was a decent programme note with plot synopsis notes to accompany each number . At circa 45 minutes long , this is a show that would work very well as  fringe event for a festival, a  supper theatre  offering in a hotel event centre or as a visit to a post primary school's senoir groups.  If you missed it, it is too bad as this was the final night of their tour where they visited five counties including Donegal. I don't think even Opera Theatre Company who take their touring remit very seriously got that far North! The group plan to return to Ennis in 2012 to present another Jukebox Opera at Easter.  Watch out for them and go see them while you can still afford them .  A most entertaining  evening .  I have no doubt we will be hearing from many of them again. Bravo tutti!
﻿﻿﻿﻿﻿﻿
Posted by Cathy Desmond at 11:02 AM