An English pub, three sisters' secret & a suburban comedy - Session 3 of the One Act Finals 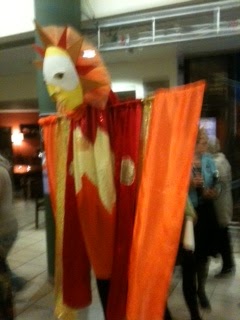 The audience was all present and correct at 2pm for the 3rd session of the All Ireland One Act Plays. Despite the late night at the splendid Festival Club at the  Old Ground Hotel, the drama afficionados were all set. The foyer  chatter was about adjudicator Anna Walker and speculation as to  how she would mark the overall competition.
Master of Ceremonies John Finn has by now cemented his reputation as one of the out-of-competition stars of the  weekend. His serial jokes about Maria Moloney's mobile phone are delivered to comic perfection. I like his brief vignettes where he recoounts his backstage conversation with each company. 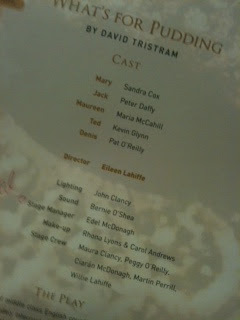 First up was locals Corofin Dramatic Society with 'What's For Pudding' by David Tristram.  This was a suburban comedy much in the style of the Terry & June TV sitcom of the 70's /80's,  complete with drinks trolley. The play was directed by Eileen Lahiffe and she did a fine job in creating a very funny comedy. The plotline is about a  bored married, couple Jack (Peter Daffy) and Mary (Sandra Cox), who  interrupted on a Saturday evening by their friends Ted (Kevin Glynn) and Maureen (Maria McCahill) and Denis (Pat O'Reilly) and what follows is a number of gags that lead to thawing in the relationship.  Maria McCahill was the stand out character with a great sense of comic timing that wrung every bit of humour from the script. The set was terrific and could be any suburban sitting room.  The audience with lots of home town support loved this show and hooted with laughter at  the many scripted and visual jokes. A well delivered farce.

The second play was Two by Jim Cartwright presented by the Athlone Little Theatre and directed by Oliver Hegarty. This is a true gem of a play that is set in a North of England pub populated  with a range of  characters and centres around the landlord and landlady. In all there were 14 characters but only two actors. Anne Hoey played the landlady and John McGlynn was the landlord. I thought that John McGlynn was outstanding and his characters ranged from a genial 'mine host' through to a young schoolboy and  a brutal wife beater. Anne Hoey was particulary effective as the defeated wife. The final scene between two was delivered brilliantly and there were a few eyes dabbed around me. The play reminded me of The TV series Early Doors  with its pathos and Northern bluntness.  The set design was by Pat Finneran, lighting and sound by Paddy Martin with Bernie Naughton responsible for stage management and costumes. Two's  production and acting will surely be in the frame when the gongs are handed out. Bravo!

The third play this afternoon was The Donahue Sisters by Geraldine Aron which was directed by Dermot Hession. The company  was the Compántas Lír from  Claregalway. The three actresses in the play  were; Mary McCarthy, Breda Hannon and Mary Killackey and they formed a fine ensemble. The story is of  three middle aged women gathering in their parents' attic to relive memories. Their lives and loves have developed  in different ways but they quickly reconnect  and we get a scene of sisters with an indelible bond. However this is a strange bond as a memory is recalled and we  see them recreate a terror. The crime scene was compelling and I liked the changes in delivery as each spoke the  voice of the victim.
A fine piece of work very well produced.