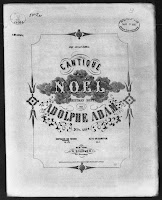 Weary  of Oh Holy Night Already?  Originally banned by the  church and   part of a seminal moment of the history of recording, have a listen to  the  fascinating history of the uber popular French carol here courtesy of Fionn Davenport's Newstalk podcasts.My first memory of hearing this carol was at a Lord Mayor's concert in City Hall, Cork about thirty years  ago, sung by  teenage soprano, Mary Hegarty, a  clear  and powerful voice soaring over the orchestra in the large hall.

Here is a round up of the various renditions I have  heard in Clare  in  the last fortnight.   Even in this heartland of traditional Irish music, this French operatic carol has taken firm root and features on most carol evenings in the run up to the 25th Dec.  Fond and all as I am of it, I suggest some ground rules to preserve some of its 'je ne sais quoi'   How about 'No singer to be allowed to perform it twice in a a two week period unless in a different  language or backwards and no performance during daylight hours (which God knows are very brief enough anyway), for starters.Perhaps the parish musical director could arrange a licencing scheme, any breaches punishable by excommunication  or early morning cantor duty for a suitably punitive period !

For a brief moment I thought I might be called upon to emulate radio engineer Reginald  Fessendon's historic task of broadcasting a solo violin version when not one but two guest sopranos were indisposed on Christmas Eve. (yes, one could quote Oscar Wilde, to lose one, most unfortunate but two!..),  but parish radio listeners were spared when Tony Murray (most recently seen as Mr Bumble in Ennis Musical Society's production of Oliver) stepped forward from the tenor ranks to perform the favourite. Bravo Tony! Bravo indeed sir!