Disco Pigs, a Dumb Waiter and a love story - Day 2 of the All Ireland One Act Plays 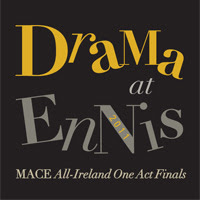 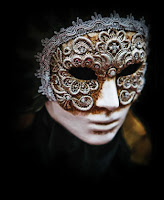 By a Guest Blogger
I'm hooked!. Yesterday I attended my inaugural night at the Mace sponsored ALL Ireland One Act Plays and tonight I returned for more. The standard seemed to go up a notch and the close to capacity audience at Glór audience was presented with three more great and contrasting plays.

All of tonight's three plays were two-handers but there the comparisons ended as we had plays based in squalor, a bleak room and a farmhouse kitchen. and that was  just the sets....

First up was Disco Pigs by Enda Walsh and was presented by Kilmeen Drama Group (current 3 Act All Ireland champions from Rossmore in Co Cork. Disco Pigs was a breakthrough play for both Walsh and the  actor Cillian Murphy. Tonight's  play was wonderfully directed by Denis O'Mahoney. The set was magnificent. was awash with wondeful props ranging from a washing line to a taxi sign.

The script  is a challenging one as it contains obscure and crude dialogue and what can only be described as an unusual coming of age story. The play is based in Cork and is peppered with references to that county.  Tanora, Roy Keane, Crosshaven etc. The plot concerns  twins Runt and Pig who are feral in nature,  exceptionally close to each other, hostile and violent to outsiders.
Irene as Runt deliveres a memorable performance and Denis  O'Sullivan as Pig was exceptional as he played the violent and naive male character. I loved the sound (by Bernard McCarthy) which contained a great soundtrack. Lighting was by Liam Daly and Denis O'Mahony and the aforementioned set was by Felix Daly, Theresa Hurley and Aileen Donovan.
This was an exceptional show, well produced, provocative and memorable.

The second show was Faded Footsteps, a new play by Maura Williamson. The play was directed by Suzanne Kirwan by the Take 5 Drama Group. This was a love story told by the two protoganists Margaret played by Noelle Clarke and Johny (Paul Finn). Paul Finn played a number of characters as the story developed. The couple were very convincing as the lovers and I particularly liked the intensity that Noelle Clarke brought to her character. Lighting was by Tomás Quirke and sound by Jonathan Brackett.with Trish Geary as stage manager. This was a very enjoyable  show and the audience reponded well to the production. 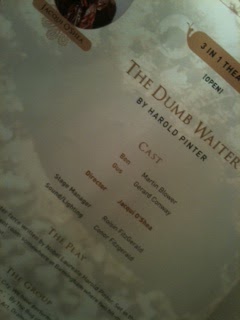 There were lots of trademark Harold Pinter silences in his play The Dumb Waiter by the 3 in 1 Theatre. The show was directed by Jacqui O'Shea. The plotline concerns two hitmen waiting for their next job in a bleak bedsit in Birmingham.  Ben was played by Martin Blower and he  was the  more brooding of the two characters. Gus was played by Gerard Conway. The duo made a good  ensemble and blended well together. There was a sence of menace as we endeavoured to unravel what they were about to do. The Stage Manager was Roisín Fitzgerald and Conor Fitzgerad looked after both sound  and lighting.
I enjoyed this play, I  felt the production values were very high and it contained some powerful acting.

A super second night, half way through and let's see what  entertainment  tomorrow brings.

John Hartery
Posted by Cathy Desmond at 2:58 AM