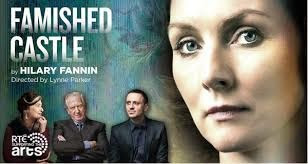 I am just in from seeing  a preview of Rough Magic's latest production.  Famished Castle, a new play by Hilary Fannin will be premiered tomorrow, Friday 8th May at the Theatre Royal  Waterford.

The play takes it's title from a sean fhocal quoted by Enda Kenny in a speech delivered on the inauguration of Michael D Higgins as president. Is fearr botháin biathar ná caisleán gortach. (Better a cabin with food than a famished castle). The drama hinges on a strained  Bergmanesque family drama that fuses bitter elements of death, frailty, betrayal, bleakness and insanity, laced with enough tongue-in-cheek humour to make the bitter cocktail palatable. Through this prism, characters offer sharp observations and wry commentary on the changes in post Celtic Tiger Irish society. 'A flawed family in a flawed country' as observed by Ciaran O'Neill in his programme note.  I was reminded of the returned emigrants from European countries that I met living in a country village that had been rapidly transformed to suburban Dublin, Baffled by the Ireland they met ,  several  returned to Europe as soon as they could.

The high point of the drama is a flashback to a fraught family gathering  where a young couple Nat (Ray Scannell) and Angie( Aislin McGuckian)  are out to dinner with Nat's parents Tom (Vinnie McCabe), a garrulous property developer and his acerbic wife, Trixie whom Tom dubs the Mother Teresa of Sauvignon. Later Nat is forced to revisit his past when compelled to return from abroad to care for Tom  and witnesses how society has changed .  There are strong convincing  performances from the quatet. I particularly enjoyed Trixie's (Eleanor Mentven's) withering retorts, sharply written and crisply delivered.  Staging was simple but effective. The lighting design produced some dramatic effects on  a diaphanous curtain backdrop. (At the preview, Angie seemed a little under-dressed for the occasion)

Original music and sound design  by Denis Clohessy made much use of marimba type percussion and created a dream-like  ephemeral soundscape .

Following the performance, there was a Q&A with director and author chaired by Una Healy. The author's links with Red Kettle was explored. They  spoke about  the creative process and the emergence  of Rough Magic  in the 80's  in a wave of new independent theatre groups in Temple Bar.  They expressed genuine delight in the venue, the bijou Theatre Royal itself.

The quality of writing in the dialogue, the sharp observation and the convincing portrayal of well drawn characters with  an original score made this an engaging  theatrical experience

listen to ‘Rough Magic’ on audioBoom 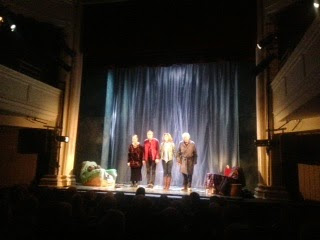 Posted by Cathy Desmond at 1:47 AM