I spent the weekend at An Grianánm, the ICA HQ  in Termonfeckin where the Dublin Chamber Music Group were holding one of their twice yearly chamber music courses. It is always reassuring to return after a gap of many years to find a place and event unchanged and just as good as you remember it. Here is an extract from  Kevin Myers' Irishman's diary  on  the event  in 1998. 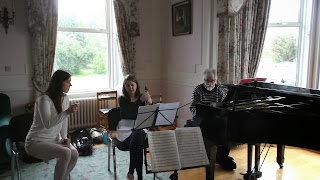 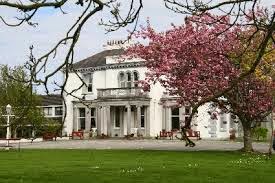 'Twice a year, the DCMG and friends go on sabbatical weekends to An Grianan in Termonfeckin, and the venue alone would justify the journey. Termonfeckin is one of the most beautiful little villages in all of Leinster, and it is one of the oldest too - it has a richly decorated high cross from the ninth century and it was the home of the great James Ussher, the prelate of Meath and later Armagh, whose modest little library once included the Book of Kells and who was once world-famous for his calculations that that the world began at 4004 BC (though even he never had the temerity to declare the date on which God invented chamber music).
Ham salad 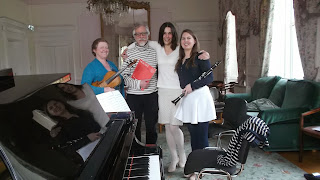 The DCMG weekend breaks consist of musical sessions over the two days under the watchful eyes and attentive ears of tutors Constantin Zanidache, Helmut Seeber and Adele O'Dwyer, concluding with a quite lovely afternoon concert in which everyone who wants pitches in. It is very informal, but still serious: it is music played as music should be, out of love. That is followed by an old-fashioned and now sadly unfashionable Sunday evening meal from one's childhood: ham salad, with thinly sliced buttered bread, fruitcake and scalding tea out of great big pots. The tea alone is enough to make you take up the viola and conquer the Everest that is Gluck, or at least, bring back Dev - the kind of tea once served to visitors by convents; it is shiveringly delicious.   Kevin Myers : An Irishman's Diary 1998

Hear hear to all that. The  tutors on this occasion were the complete ConTempo string quartet who were between OTC Rigoletto engagements. On Saturday night, there was an open rehearsal and we heard a performance of Haydn String Quartet, Opus 76, no 2  and Beethoven.   My group for our Sunday afternoon concert performance of Mozart's Kegelstatt Trio consisted of Karen Ni Bhroin and Ronán Conroy. You can hear my interview with Karen here. We were tutored by Andrea Balencu,. You can hear Ronán read his poem, A Muse is a Terrible Thing   inspired  by Andrea's wondertfully animated coaching  here.

The next weekend is the October Bank Holiday. All musicians are welcome. As My Myers said 'they are enormously enjoyable, civilised and enjoyable.

Posted by Cathy Desmond at 9:23 AM