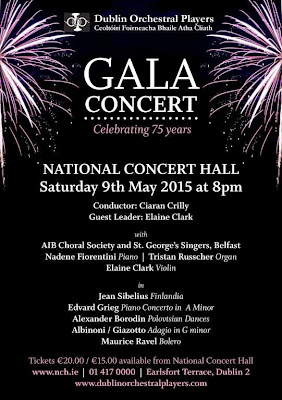 Surveying the classical music scene, the limelight  naturally falls  on the professional orchestras and ensembles practicing their craft in the grander concert halls. Two  RTE orchestras  provide rich big band experiences for music lovers in the capital. It was encouraging to see the RTE NSO move  out of their comfort zone and play to packed houses in Cork and Waterford recently.
Limerick is fortunate to have the splendid  Irish Chamber Orchestra as  residents. In the vanguard of new music, The Crash Ensemble have garnered much praise internationally for exposing the new and the Irish Baroque Orchestra  have kept the muted glow of the past burning with elan.  But beyond this harmonious inner sphere is a broader circle of enterprise drawing on dedicated amateurs that fill the ranks of choirs and orchestras to create a panoply of events that immeasurably illuminate the Irish cultural landscape. Many of these probably won't be recorded in  national press reports for future historians to mull over  In Dublin this weekend, I was fortunate to catch two thrilling events from this end of the spectrum.

As the  National Concert Hall prepared to welcome the great Russian violinist, Maxim Vengerov  to join the  NSO  to celebrate the 150th anniversary of music making within it's grand portals, an amteur ensemble slipped onto the patform  ahead  of the posse. On Saturday night , 150 years after the opening of the hall, I was in the packed house to hear the Dublin Orchestral Players celebrate their own 75th anniversary with a gala concert. It is hard to imagaine that as the Allies and German forces battled in the turmoil of  Dunkirk, players  were rosining their bows in St Andrew's Church Hall in Suffolk St at the very first rehearsal of a new amateur orchestra. Members were asked to contrinbute 3 pennies  at the door. Sufficient thruppeny bits were collected to present a concert in the Abbey Lecture Hall on June 5, 1940 conducted by Havelock Nelson and Constance Harding. Over the years, the orchestra has delighted audiences, encouraged young soloists and conductors, given a platform to new music by  Irish composers and a creative outlet for the talents of their members, most of whom who have day jobs in other areas. I am proud to have been a member myself in the early 80's. In a detailed history essay, I note ,the contribution of Anew McMaster as narrator. 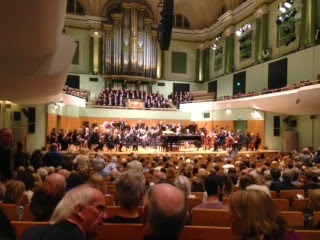 Rising star, Nadene Fiorentini sparkled in Grieg's concerto. The programme notes informed us that Valerie Walker was the soloist when the ensemble first performed the work in 1952 in the Abbey Lecture Hall .  Ms Walker was a guest at the gala on Saturday.  As  a bonus Tristan Russcher  pulled out the stops on the NCH organ in Albinoni's  Adagio- a rare treat. The orchestra was joined by not one but two choirs, local AIB Choir and  St George's Singers from Belfast imbueing the event with a cross border element. If the skill level was more uneven than a mainstream professional event, the sense of occasion and rapport with the audience was at the top of the scale. A spirit  of gala glee mingled with pride fuelled the post show buzz in the foyers and the audience  lingered long after the final notes to savour the atmosphere of the occasion.  (One minute of undiluted post show  buzz in the audioboo) 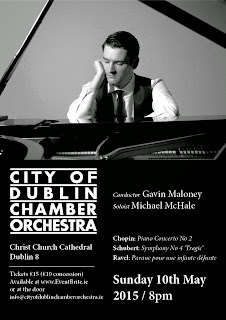 On Sunday, while Vengerov was rosining his bow at the NCH, Belfast pianist, MichaelMcHale was flexing his fingers  in the hallowed crypt at Christchurch as he prepared  to join the City of Dublin Chamber Orchestra under Gavin Moloney. Under mellow lighting and Gothic arches, McHale gave a mesmerizing performance of Chopin's Piano Concetto no 2. A poetic benediction in a magnificent sacred space.  His teenage jazz roots showed through in a unique interpretation of Danny Boy in an encore. Formed in 1966, the orchestra originally known as the Dublin Baroque Players has been rebranded to better reflect the broader range of repertoire and constitution.

Iam happy to report there were very few free seats at either venue. We send an extra round of virtual applause and a shaft of bloggersphere limelight to both these terrific ensembles. Long may they flourish and delight.us