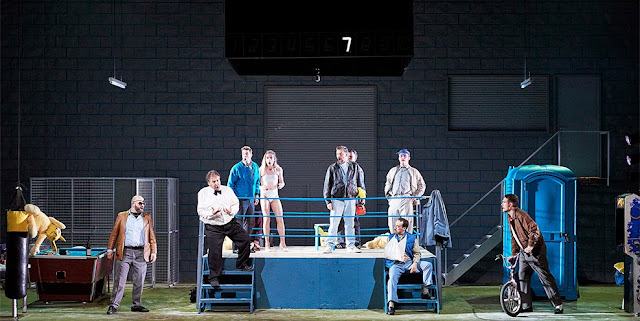 Leaving Munich Opera House on a trip recently, I noted a row of seats at the top of the house with no view of the stage but with dinky seat lamps to allow reading of the libretto while listening. to a performance.  Curious, I thought.

I ran into the cast of Opera Theatre Company's  at a service station on Monday as they journeyed from Dublin to Donegal to present their latest  production of Verdi's Rigoletto. There has been much hand wringing over the lack of a major house in the capital. As a provincial theatre goer, I am much more concerned that we continue to have good touring productions and OTC do a fantastic job of bringing top class singers and musicians  regularly to a theatre near you at reasonable ticket prices. Tonight they are in Kilkenny  at the Watergate Theatre and your last chance to catch them is at the Lime Tree  in Limerick. With at three locals in the cast, Kevin Neville, David Howes and Owen Gilhooly -there should be a rousing reception to close  proceedings at the  Shannonside, Duke's Court.

My review of the production appeared  in Saturday's Irish Examiner http://www.irishexaminer.com/lifestyle/artsfilmtv/opera-review-opera-rigoletto--oreilly-theatre-dublin-332384.html

With a tight word count, there wasn't room for everything and I want to note also the excellent performances of Kate Allen and John Molloy. Both are deliciously dark in character and timbre as the ‘hitman’ Sparafucile and ‘masseuse’, Maddalena. The male chorus of 'scumbags, scangers, spastics and of course eejits' , bearing all manner of gangland weapons are very impressive.

In musical terms this was a superb performance in so many respects. but the production appalled  me. Transformations of the aristocratic milieu of 16th century Mantua to visions of sleazy 20th century underworlds is mainstream stuff in major houses . Jonathan Miller’s enormously popular Mafioso staging for ENO is 30 years old.  Here is the quartet from that production. Sleazy but quite stylish and  retaining a degree of charm, I think.

Picking up the resonance of newspaper reports around an infamous double murder in the 1980's, The current OTC production  appeared to me to be a GUBU Rigoletto.  The plot also  features a double murder, Monterone and Gilda both are dispatched (spoiler alert) Set in a grotesque  'boxing club' set of with prominent portaloo, cage  and other club accoutrements . Singers are never allowed to simply stand still to deliver their arias but are kept busy with bizarre tasks such as rearranging oversized bunnies or simulating sexual activity. Gilda's Cara Nome is performed while zipping the Duke into a large bright yellow onesie.


All this  'provocative' theatrical busyness  does rather drain the energy from the piece. Is the general audience best served by a radical charmless production, I wonder? In her preview interview with me for the Irish  Examiner , Emma Nash spoke about being introduced to the genre by her father at a live performance at Cork Opera House. It seems a shame  that this was not a production you would want a young newbie to see or indeed that I myself would want to revisit. For many who don't travel to see opera , this might be the only production we may have a chance to see in years.  Do we really need a fresh innovative  approach.?

Suddenly, an option on those 'libretto seats' seem like a rather  good idea.