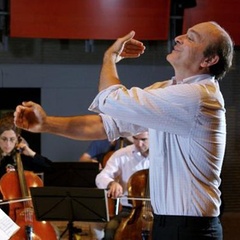 It has been ages  since I've heard the Irish Chamber Orchestra but free of commitments on Thurday  I joined the reasonably full house at University Concert Hall Limerick for a programme of Classical symphonies and a ballet suite based on melodies from Carmen . And very fine it all was too. While you can be sure that the playing will be first class from the ICO, a particular draw on this occasion was the chance to see and hear the charismatic Hungarian conductor, Gabor Takacs Nagy. After several decades at the helm of his eponymous string quartet, he has changed roles and is tipped  as being one to watch for a plum conducting positions with one pf the major London symphony orchestras. So far he seems happy to practice his art with smaller ensembles outside the capital and is working with premier chamber ensembles, Manchester Camerata and now in a new role as 'Artistic Partner' with the Irish Chamber Orchestra. (The Takacs String Quartet still exists now based in the US with two of the original members in the line up )

As if in an effort to make a connection with the audience from the outset, the tall and slim Hungarian , made his entrance  from front of house and first addressed the audience reprising some of his remarks made at a pre show dinner address.  His voice didn't project  quite enough to carry effectively to the higher levels of the house and that aspect of the performance didn't add value for me seated at the back of the stalls. You can catch a flavour of his style  in the video below. In his expressive conducting gestures he  radiates a sense of energy  and a most genial personality that is very appealing.  In the Mozart and Haydn symphonies, he drew a performance  marked with precision and contrasts from the Irish Chamber Orchestra. I have rarely heard such hushed pianissimos and the reading of the Haydn  brought out the dramatic elements of the work.. Unusually the two oboes were placed in the hot seats  right in front of the conductor and the Haydn was performed without a keyboard continuo part.
The percussion players were the star turn in the fabulous Camen Suite by Russian composer Chedrin .  A group of five players including the experienced Noel Eccles and rising star Alex Petcu fanned out across the stage enclosing the orchestra. adding lashings of sparkle to the rich and sonorous string sound  . I specially liked the marimba duet. Shorn of  the distraction of voices and stage sets, just how resilient and numerous  are those Bizet's melodies  was apparent in this reworking for the composer's ballerina wife who Takacs Nagy informed us had last danced to the work at age 61!  Hope for us all yet.   -And the very best way to finish-, the longest silence  before applause and a deserved standing ovation.

Venue Notes I went along to the pre show dinner  in the  elegant period dining room of Plassey House. The Hungarian maestro gave a  charming  pre dinner address  before departing to prepare for the concert .   He opened with an anecdote about his first trip to Limerick in the 70's as a member of the acclaimed eponymous string quartet .  He spoke animatedly  about his approach to the task of conducting and of course complimented the players of the  ICO.  Opportunities to meet the performers are welcome.  Open rehearsals, pre concert talks and post show signings extend  the concert experience.  Entertainers /artists in the commercial world know the value of meeting and greeting their audience and the show ain't over 'til the post show hand shakes and signing are done. However as in the NCH last week, UCH does not encourage patrons to dally . Why not open the cafe  and/or bar for a period after the show and even engage in a little merchandising. The ICO like any recording artist has CDs to sell  after all .