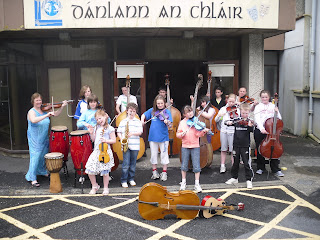 Many thanks to all those involved in the inaugural - CDS Summer School.

The young participants of the CDS Summer Music School gave a special lunchtime performance at Danlann on Chlair to close the event . They delighted their capacity audience as they demonstrated their new skills acquired over the course of the week under directors Cathy Desmond and Edel O’ Halloran.

The aim of the week was to give participants an introduction to learning a musical instrument with all instruments provided.
All participants received special certificates for their attendance and progress and the special student award for the CDS summer school was awarded to Christine Gillespie for her impressive progress on cello over the week.

Particular thanks to all the daily guests at the Summer School

Posted by Cathy Desmond at 2:00 PM