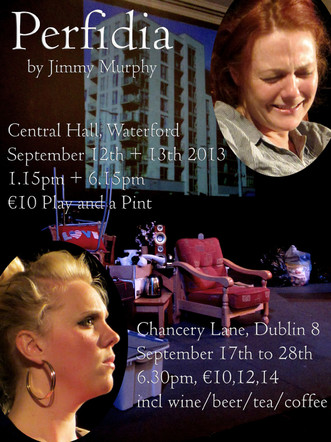 At some point in the last decade I realised that although once an avid fan, I could no longer describe myself as a theatre goer. Revivals of plays I had seen first time round didn't interest me, One Man shows made me wary, I had had enough Playboys of the Western variety to do me for life and with the quality of TV drama improving all the time, going to a play seemed more like being strapped into your seat for hours without the remote control. However I saw a play today that restored my faith in the medium of live drama unadorned by any musical component. With a modest set and a formidable duo of actresses, Jimmy Murphy's play Perfidia plugs right into the zeitgeist of the times. The snapshot of the impact of Celtic Tiger collapse has resonances in real life tragedies prevailing in this weeks media stories around the unfortunate Priory Hall fiasco.

The acting is accomplished, both ringing true to their respective sides of the class divide. The writing is perceptive and well observed. I particularly liked the verbal jousting when Niamh goaded from her default politeness makes cutting remarks about Ciara's entitlement mentality. There is an odd raport between the characters but there is nothing saccharine about it. There are some elegant touches such as the allusion  to Rapunzul in her tower in Ciara's situation hemmed in  her high rise abode both seeking a rescuer. While I identified with Sharon Clancy's Niamh, the stressed mortgage defaulter, Jenny Clooney's feisty Ciara wins your empathy with a degree of self awareness and a good dollop of humour.  Niamh's story wasn't my story but it could so easily have been. I was more moved by the denouement than I can remember being in the theatre for a long time. The show is well paced and at a little under an hour isn't going to make that remote control thumb too fidgety. 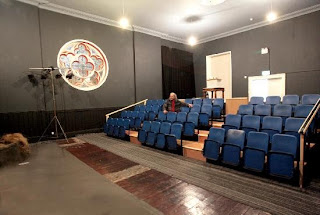 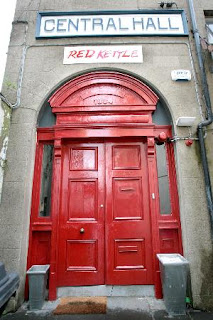 This is a great venue, a small venue seating 50 or so conveniently located next to Jordan's pub which serves  as a convivial post show gathering placeand where  audience and cast repaired to recover after the lunchtime presentation. At a tenner for a play and a pint, this is one of the best value theatrical experience you are likely to have.The production moves to Dublin to open a brand new theatre space in Chancery Lane Dublin where director Frieda Ryan tells me Michael D  Higgins will be add presidentail gravitas to the first night audience. How about that!  Bravo Red Kettle on a thought provoking presentation.

We hear on the grapevine that director Frieda Ryan's next project will be directing the renowned Denise Quinn in Bag Lady by Frank Mc Guinness in December. Even with my reservations about single handers, in this case I will have to make an exception.

Posted by Cathy Desmond at 6:44 PM