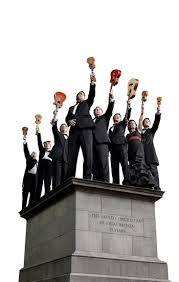 One of the choice musical moments in the Ukulele Orchestra of Great Britain's concert at the Theatre Royal, Waterford on Saturday night had a resonance with another major event. Around the same time as the Italian maestro of the silver screen was raising his baton to conduct the 97 strong Roma Sinfonietta in Dublin, the singing , whistling and strumming octet were giving the epic film theme to the Good,the Bad and the Ugly their own inimitable treatment. I don't know if Morricone has seen it but I think he would approve.

The Ukulele Orchestra were last in Waterford as part of Spraoi in 2007 , a particularly rain sodden year in which their performance in the Tower Hotel Ballroom was a highlight, and a gig it seems everyone in the city claims to have been at. With a mix of  droll banter and physical clowning along with highly skilled playing in clever inventive arrangements, there is a whiff of a Blackpool End of the Pier show about the ensemble. One wonders if they miss the  relative simplicity of their pub and village hall gig days now that their schedule takes them literally to the ends of the earth and to lofty grand halls of the world such is their popularity.


To say that the repertoire is eclectic is an understatement. They seem to consciously eschew that traditionally associated with the instrument in favour of more contemporary material and apart from a Tiny Tim hit, the set list doesn't dwell on nostalgia.

Earlier in the day, there was an opportunity to meet the members in person as the full complement turned out for a workshop in the Central Hall, the only such event, I believe scheduled on their busy tour. There were some fascinating insights into the inner workings as members graciously explained their various tunings, the division of musical roles among the group and recalled personal highlights of their performances now incredibly spanning almost three decades. There was a sing along to a mash up of camp fire songs. Following the session attendees and several ensemble repaired to Jordan's for more uke chat. Hanging out with the world famous Ukulele Orchestra in Jordan's. Saturday afternoon in Waterford doesn't get any cooler than that!

Venue Notes: The balcony was uncomfortably hot and sticky from early in the evening. The effect of any air conditioning was not detected until towards the end when there was a pleasant cooling blast.

The Central Hall is  a useful venue on the Quay near the Reginald's Tower End. Managed by Red Kettle Theatre Co., the acoustic is very good and it has tiered seating for a capacity of 50.


You can hear my interview with promoter Pat Byrne below
listen to ‘Pat Byrne Promoter’ on Audioboo
Posted by Cathy Desmond at 12:59 AM