'Corps et Ombres'. In the Frame; Caravaggio in Montpellier

There is a special place in  Irish art lovers' hearts  for 17th century Italian painter, Caravaggio
The discovery of the the masterpiece, 'The Taking of Christ',  implausibly hanging over a fireplace in Dublin was much reported on in the press in 1993 and  the painting turned up recently on the much talked about RTE series, The Nation's Favourite Picture, chosen by popular local hero, Ken Doherty. Quite the Renaissance man himself, the Dublin international snooker star has a penchant for the contents of frames other than those on the green baize.  Further unexpected finds of the Italian Master have been reported this week from Milan, although experts remain sceptical. Reading this article in the Irish Times,  whatever about the provenance of the paintings, it seems very unlikely that a team of experts managed to keep the find  under their hats for two years


By all accounts, he was bit of a  bowsie (Caravaggio, not our Ken) and prone to a bit of a schmozzle as they say in sporting circles, and even though he refused to take an apprentice, jealously guarding his techniques for producing his innovative  chiaroscuro effects,  he could be said to have founded a school of painting malgré lui.

The Fabré Museum in Montpellier is currently showing an exhibtion  Corps et Ombres (literally , Bodies and Shadows) dedicated to the painters work and those of his followers. The exhibition is an initiative of FRAME a collaborative venture between regional French and American galleries. 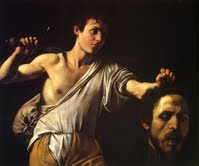 The vivid, rather gruesome Tarantinoesque display of extra large canvases  on several floors of the Fabre Gallery was impressive. The themes were mostly religious with a preoccupation with severed heads  either Goliath after his tete a tete with David and St John the Baptist  having got on the wrong side of Salomé. The Security Guards seemed to be on high alert, no doubt mindful of the unfortunate mishap with a Monet in Dublin this week .


The Fabre Museum is housed in an  attractive leafy boulevard in the Southern regional capital.  There was a choice of attractive lunchtime spots and we enjoyed the entertainment provided by this trio of buskers at Cafe Illona  We stayed in the nearby seaside resort of Palevas- les -Flots   where our hosts  at Le Cigaliere   Hotel    spoke warmly  of their fishing trip to the Shannon region.

listen to ‘Buskers in Montpellier, France July 2012’ on Audioboo


listen to ‘Buskers in Montpellier, France July 2012’ on Audioboo

listen to ‘Buskers in Montpellier, France July 2012’ on Audioboo
Posted by Cathy Desmond at 6:30 PM