And advance, retreat, advance, retreat and dance in your own place
Round the house for the last time now your fleeting steps retrace
Shape the silence to a golden reel and dance away all care
Through the night I hear your whisper, "dance a set for me in Clare"
From A Winter's Tear by Tim Dennehy


The last time I was in Power's Bar in Clarecastle was the occasion of the farewell concert of local tenor Dean Power prior to his departure for a young artist's position at  the Bavarian State Opera. As Dean shared the stage with some of the world's finest international opera stars in  his role of Nathaneal in the Tales of Hoffmann, fellow members of the Clarecastle  Singers Club  gathered in the local bar for the 12th annual session last Friday night in one of the events of the Ceili at the Crossroads Festival. 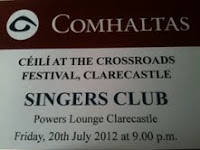 If you haven't been to one , singers' sessions or clubs are a very particular type of musical evening. The emphasis is very much on the solo unaccompanied voice and instrumentals are rarely a feature. At the ones I have attended , the song selection has been in a traditional mode usually in  English. They are presided over by an MC or  a Fear an Tí who calls for order and calls on contributers in turn and generally keeps proceedings moving along smoothly. This makes this type of evening a bit easier to navigate than the musicians session where the etiquette isn't so apparent. In contrast to many choirs in the area, there was a greater proportion of gentlemen than ladies voices.
I arrived at 9.30 pm to find the session in full flow with a gathering of more than a hundred singers and listeners.  Procedings I am told were opened by veteran singer Robbie McMahon,  the King of Spancillhill.  There were love songs, songs of young love thwtarted, and love gone awry .   By far the most prevailing theme of the evening though was of emigrants  pining for home and happier times be it the Town of Killaloe,  the foot of Slieve Bloom ,  or the ole misty isle in general as in Isle of Hope  and the old family homestead in particular as in My Father's House  and This Old House   A visiting singer's song extolling the virtues of the  English Lake District echoed this theme as did the lovely  lilting Scottish Soldiers's Song .  There were political  ballads  and the ever popular anti war song Willie McBride . As the saying goes  'all our songs are sad'  and indeed there were relatively few humorous songs  but I enjoyed Phillip Brennan's self penned The Well of Tobartaoscán and sport got a look in with Gerry McNamara's Let Hurling Win the Day  dedicated to the local Clarecastle GAA Club celebrating 125 years of existance .


The songs came thick and fast with interludes of funny stories before finally a short break to gather breath. Fear an tí, Tim Dennehy resumed the session  with  the spoken word, a poem by Michael Coady from Carrick on Suir (reproduced below) and one of his own self penned songs , A Winter's Tear one of  the most powerful renditions of the evening. The were reminiscences on the late and much missed Peadar McNamara, long time host of the singers sessions in Clare . Last night as I was leaving at nearly midnight, local TD Joe Carey  was being called for  a song . I gather the singing went on til the early hours and everyone who wished to contribute was heard .  Fearr an Ti Tim Dennehy was assisted by Anne Whelan and there was excellent order for each contribution from the large gathering. A truly inclusive musical experience
Listen to Deirdre Callinan Griffin singing and talking about  sean nós tradition  at a workshop in Clarecastle on Saturday morning.


listen to ‘Clarecastle songs ’ on Audioboo

Though There are Torturers
by Michael Coady
Though there are torturers in the world,
There are also musicians.
Though, at this moment,
Men are screaming in prisons
There are jazzmen raising storms
Of sensuous celebration
And orchestras releasing
Glories of the Spirit.
Though the image of God
Is everywhere defiled
A man in West Clare
Is playing the concertina,
The Sistine Choir is levitating
Under the dome of St.Peter’s
And a drunk man on the road
Is singing for no reason
This is a rough list of participants and songs 930 to 12.00 . All details may not be accurate
Maire O Donoghue  Love Song  Michael White Chapel Gate of Curraclare Rebecca Griffin My Forever Friend  Charlie Landsborough , Helge Belgium, Young Siobhan Cunningham Crusheen, Joe Downey Isle of Hope, Triona Marrinan O Grady  Hannah, by the roving of her eye, Gerry Abraham The Orange and Green, Mick ScanlonThe Town of  Killaloe,  Gerry McNamara Let Hurling Win the Day,  Darren Richmond Cumbria Song, Anne Whelan Love Song Can you hear me London Town,  Phillip Brennan The Well of Tobairteascain , Hugh Kearney , Joe Kearney   Funny tales,   Peter O Connell In my Fathers House PJ Fitzpatrick MyOld Sligo Home,  Ger Carrigg My home at the foot of Slieve Bloom,  Donal Kenny Robert Emmet,  Michael Whelan Scottish Soldier Song Mary Clancy Song of Emigration ,  Noirin Lynch Love Song, Cathy Desmond Love is Teasin'
Related articles
The Raw Bar  Festival of Traditional Singing

The Singer and the Song Willie Clancy Week  2012

Come the Sails   Michael Coady was one of the featured poets