In a nice nod  to  local passions,  Ben (Rory Musgrave) wielding a hurl  and in  full Kilkenny kit arrives on stage at Castalia Hall,  bearing a gift, a pink sliother. ( Irish readers will know of course that Kilkenny natives spend at least some part of their adolescence with one arm permanently attached to this wooden sporting accoutrement). His amour {Laura Gilsenan) looks pleased if a little bemused and he is all set to pop the question but somethig thwarts his plans.  The plot of Gian Carlo Menotti's charming  one act domestic drama, The Telephone rings a bell with a  21st century audiece as distracted with a multitude of connecting devices as Laura  is with her elegant 1950's model.  And so begins a highly entertaining evening  at  Opera at Castalia 2015, a weekend festival dedicated to  one act opera under director Alan O Conchubhair.  The staging is simple but effective   The standard of singing is high end quality  with a mix of established professional singers and students at an advanced stage in their studies.  This year, there was no litany
of woe and all three works were  bright and breezy works in a comic vein.

The second Menotti work was the meatiest work of the evening. Directed by Owen Gilhooly of Mid West Opera, The Old Maid and the Thief is said to be the first peice commissioned for radio performnce. Dara McMahon and Muireann Mulroney are the old maid and busybody Ms PInkerton. Highlights are "What curse for a woman, is a timid man (Steal me, sweet thief)," an extended aria where Laetitia (Maria McHugh) sings of her affection for Bob. Baritone, Tim Shaffrey shines in "When The Air Sings of Summer ' when Bob contemplates hitting the road.

If Menotti's work springs from the opera buffa tradition, La Serva Padrona was one of the original Gerry Noonan's exasperated Pandolfo had us laughing out loud. Maria McGrann's was a powerful minxy maid. Tenor Andrew Gavin made the most of his cameo as a hip swivelling Elvis impersonator.
templates. Notorious for sparking the guerre des bouffons, a 18th century controversy on the merits of Italian comic opera versus French grand opera, Liz Ryan's contemporary production made this Baroque gem sparkle set between the two Menotti's .

While the spotlight is on the singers, one of the most impressive aspects of performance is the support given by all three pianists who bear the onerous task of single handedly providing the musical scafford to elevate their singing colleagues. The trio who made light work of some tricky parts were; harpsichord major, Adam Collins for The Telephone and Niall Kinsella served in The Maid as Mistress. Michael Young was a powerhouse in Menotti's Old Maid and the Thief.

Given the skill level and calibre of the event, |I find it extraordinary that this event appears to survive merely on good will of the participants and receives no funding.  It is still relatively young endeavour. It began in 2012  an initiative of the late Brendan Mills and Alan O Conchubhair. I hope it will become established as an annual event. The talented team under director Alan O Conchubhair provide terrific entertainment and a valuable platform for Irish singers and musicians. Next year, a work by composer Fiona Linnane is scheduled to receive a premier. Opera at Castalia ticks lots of boxes and is worthy of support.

The venue. Castalia Hall is part of the Camphill Community campus  near Callan in the heart of County Kilkenny. It is an unusual ceilinged octagonal space with an adjacent outdoor amphitheatre . 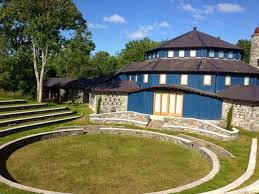