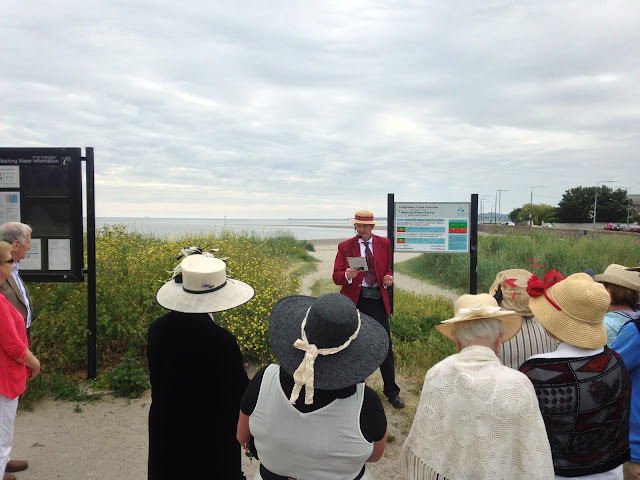 'Stephen's boots crush crackling wrack and razor shells, squeaking pebbles, wood sieved log by the sandworm, lost Armada. Open your eyes, a stride at a atime. Am I walking into eternity along Sandymount Strand? 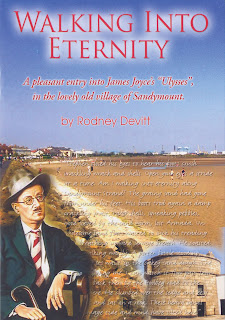 Early Morning:  A profusion of  suitably straw hatted ladies and bow tied gentlemen gathered in the morning at the Iris Charles Centre, Sandymount to feast on devilled kidneys and bucks fizz. Despite the eary hour,  the annual Bloomsday Breakfast  had an element of an Edwardian parlour soirée. Under the stewardship of  Rodney Devitt,  scholar and entertainer, our Joycean repast was accompanied by readings and  musical turns.  How lovely to hear a sung version of the Coolin and we enjoyed readings and poems from Eleanor, Pyllis and Glynis, I enjoyed a musical setting of Joyce's poem , Chamber Music. I was delighted to contribute a couple of airs on violin  Amply fortified, we sallied forth to visit locations  from Hades, Proteus and Nausicaa, the three episodes of Ulysses set in Sandymount accompanied  by Rodney Devitt's  insights and  reading of related passages. You can hear Rodney read a snatch of Ulysses in the audioboo below.

Mid Morning:  The sun came out as toddlers, tennis players, and Joycean enthusiasts converged on the  green triangle of Sandymount  Green.  The Great White Shark of Joycean scholars, David Norris gave a coulourful reading from the Nausicaa episode of Ulysses . Charles Lysaght read passages associated with cricket while Anthony Jordan picked up a political thrread. James Conway and Mary Guckian from the R&R Writers' Group  read from their own anthologies inspired by Joyce.  A bowler hatted Paddy O Dwyer brought us back to Hades MC, Joe McCarthy of the Sandymount Tidy Towns Committee looked splendidly Joycean in roundy specs and appropriate moustache. Mezzo soprano Bríd Ní Ghruagáin had the assembly in raptures at her rendition of Balfe and Moore (Believe Me if All Those and Marble Halls) Looking every inch the grand Edwardian dame in  black velvet and cream, thespian Glynis Casson added words and song from The Portrait of an Artist as a Young Man. The event concluded with a genteel singalong of 'Finnegan's Wake' 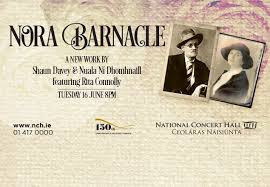 Evening: It was returns only at the NCH for Nora Barnacle, a brand new song cycle by Shaun Davey. Similar to Granuaile in that it that it features a song set for a solo soprano, but  simpler in style and featuring a pared down ensemble of piano, clarinet, concertian/accordion, extended percussion and guitar.  Nora's story is told in Nuala Ní Dhomhnaill's terse repetitive text as a series of postcards home (18 in total) from the various staging posts. A brief biographical  programme note was projected at the start of each song.  It is not often you hear a clarinet and concertina together,  and the two reeds made an appealing blend. After a sustained applause and a standing ovation, the ensemble reprised, Nora in Paris. The limitations of just one voice stretched the relatively plain material a bit too thin to sustain my interest over a whole evening. 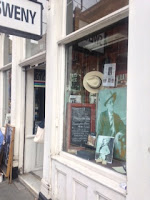 Bloomsday was fun. Sandymount was the place to be.  Root out your copy of Ulysses and make a date for next year. If  you can't catch one of Rodney Devitt's  Joycean walks, you can pick up his guide book, Walking into Eternity at Books and Things on Sandymount Green.
Watch out for the gorgeous voice of  Bríd Ni Ghruagáin.  She will be appearing in  Lerner and Loewe's Brigadoon at the NCH on Saturday June 20th. 3pm and 8pm

The mood  of Bloomsday frivolity was caught nicely I thought by Marty Whelan's regular  correspondant, Hugo Listen to the extract from Marty in the Morning on LyricFM  here
http://www.rte.ie/radio/radioplayer/rteradiowebpage.html#!type=radio&rii=16%3A20798267%3A5345%3A17%2D06%2D2015%3A