I Was Glad: Cathedral Choirs Converge at St Canice's 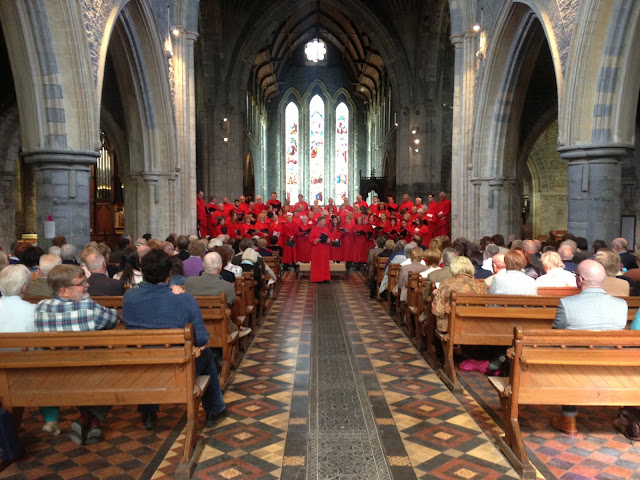 While the Deise Hurlers  were thrashing Cork at Semple Stadium, Waterford fielded another team in a less combative but no less arduous inter-county endeavour. On this occasion, all teams lined out in  red as Christchurch Cathedral Choir joined choirs of St Mary's, Limerick and the home team of St Canice's Cathedral for an afternoon of  sacred music from the Anglican Choral Tradition.

The celebratory mood was set from the start with Parry's coronation anthem, which Kate Middleton walked up the aisle to in 2011. Limerick offered  three settings of psalm 119. Teach Me Lord. Kilkenny. St Canice's with the largest group approaching 30 voices produced the fullest sound, equally at  ease in the complexity of Gesualdo's 5 part motet as Reger's chorale like Marian hymn.

Christchurch, Waterford added a contemporary edge with a Fauréesque flourish. Composer Eric Sweeney directed the choir in his own work. The Mass of St Patrick was commissioned by St Patrick's Cathedral  and premiered in Dublin as recently as 2007. It  was conducted on that occasion by Peter Barley who was at the helm of the Limerick contingent yesterday.

The concert closed with a performance by the combined choirs of a teenage Schubert Mass. The work featured some impressive emerging talent. A voluntary membership of adults is supplemented at St Canice's by Choral Scholars of school and college music students introduced as part of the revival of the choir in recent years under director David Forde.  (Names are noted below. Watch out for them. They are good.)  You can hear a brief interview with David below and a snatch of a Schubertian Sanctus.

Any endeavour is always enhanced by the addition of cake. I am happy to report that the audience enjoyed a superior array of home baked goodies following the performance.

The programme will be repeated in Waterford and Limerick. I will post dates when I have them to hand.

Posted by Cathy Desmond at 8:57 AM