The 8th Waterford Film Festival went about its business this weekend with a series of sessions in Garter Lane. The venue is a good one, centrally located and with a fine cinematic set of equipment.
The festival features short films of c10 mins which are presented in batches of 6 or 7 at one sitting.
I caught one screening which included 8 movies. They ranged from a menacing hostage revenge drama as gaeilge via an hilarious comedy set in a gym to a fine drama about grief and loss set on a river boat.

I was lucky  enough to catch the winner ' They Call Me The Kid' a sort of coming of age drama set in a fun fair. This tracked a day in the life of a 12 year old boy. He was accompanied by his imaginary guardian, a cowboy, as he overcome the challenge of his day. 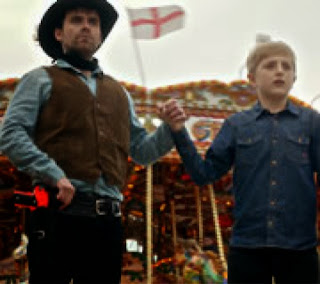 I liked Open Mic a take on the world of the London stand up comedy scene with a nice twist at the end.

My favourite was Waterway written and directed by Carrie Crowley. This was wonderfully shot on the Shannon and captured the hidden world of the Irish inland waterways.  The piece featured National Treasure Michael Harding and Druid Theatre veteran,  Marie Mullen. Amongst the credits was somebody who had the wonderful title of Cast Mammy!
Who knows what future famous screen directors or actors were amongst the movies we saw?

Bravo to all involved and great value at €6 a session.
Posted by Cathy Desmond at 1:22 PM