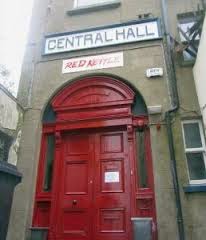 The appointment of liquidators to the Waterford's Red Kettle Theatre Co. has been a cause for dismay when announced last month .  Established in the mid 80's it has generated  civic pride and a source of quality entertainment over the last three decades and many times featured in these posts.

Best known for the  association  with playwright Jim Nolan,,  Red Kettle premiered many of his plays in Waterford beginning with The Gods are Angry, Miss Kerr. It was encouraging to the whole scene that while other writers left for the groves of academia, Nolan chose to stay and write and produce in his native city. Together  he and Red Kettle made Waterford a beacon for what could be achieved by a regional theatre company on relatively low subsidies. At the same time the Waterford International Festival of Light Opera attracted many overseas visitors and the Theatre Royal was packed for a fortnight of musical theatre and operetta. Quite how that festival  slipped away in 2012 without any gloomy pronouncement, I can't fathom given that every small town has an active musical society.

'The magic is gone' said Liam Murphy, arts and theatre critic of Thye Munster Express  on Morning Ireland when the news broke  and the tone was mournful, not quite on the scale of the announcement of the closure of the Glass Factory but no less symbolic.   Coming in the same year as the death of Bryan Flynn, extraordinary man of theatre,  whose original musical Pentimenti was premiered by the company it has been a grim time  for Waterford arts.

Red Kettle along with other regional theatre companies  had it's  Arts Council funding slashed in recent years. Spraoi Festival,  which has to be the most accessible arts experience in the country and  which  reaches the largest proportion of Waterford citizens not to mention the many visitors it attracts has also had its funding slashed to ribbons.  Cllr Mary Roche who was on the first Red Kettle board, has done a trawl through the funding stream for the urban centres outside Dublin and Cork and  the results make for depressing  and infuriating reading. Her report posted on her blog  puts flesh on some misgivings I felt as I attended events this year.  While I love opera and have travelled to see many productions, I don't see how the Arts Council can justify spending almost  €600,000 on a single production of an avant garde opera production which at best will appeal to a niche audience. The BGE Energy Theatre was half empty on the one of three night when I visited, Wide Open Opera's producton of Nixon in China. . Arts practitioners around the country must read about it and weep. Nick Bankes Chairman of the Imagine Arts Festival which runs in October in Waterford had this to say on the funding level of the Imagine Arts Festival


' it seems disproportionate that the arts council can put 1/4 million into 5/6 nights and only 11k into ten days of 80 events including some original events at the Imagine Festival.
The most bitter commentry is in this week's Phoenix column in the News &Star which gives a sense of the alienation felt by those involved in Waterford arts scene ''We can but look (again) and marvel at the success (and €3 million support for Galway and it's notion of being a centre for the arts. pause for a while and consider the €6 million thrown without demur at Limerick City of Culture and suggest for the umpteenth time that WE ARE NOT BEING HEARD' 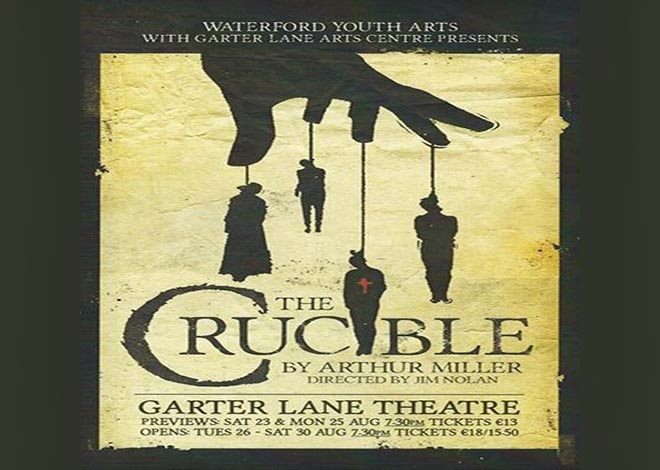 On a positive note, the Waterford Youth Arts under artistic director Ollie Breslin,  mounted an impressive production of Arthur Miller's The Crucible at Garter Lane Arts Centre.  There were some remarkable performances particularly from the male cast and a terrific set from Dermot Quinn. The launch of a new musical society augurs well for the future.

Posted by Cathy Desmond at 7:52 PM