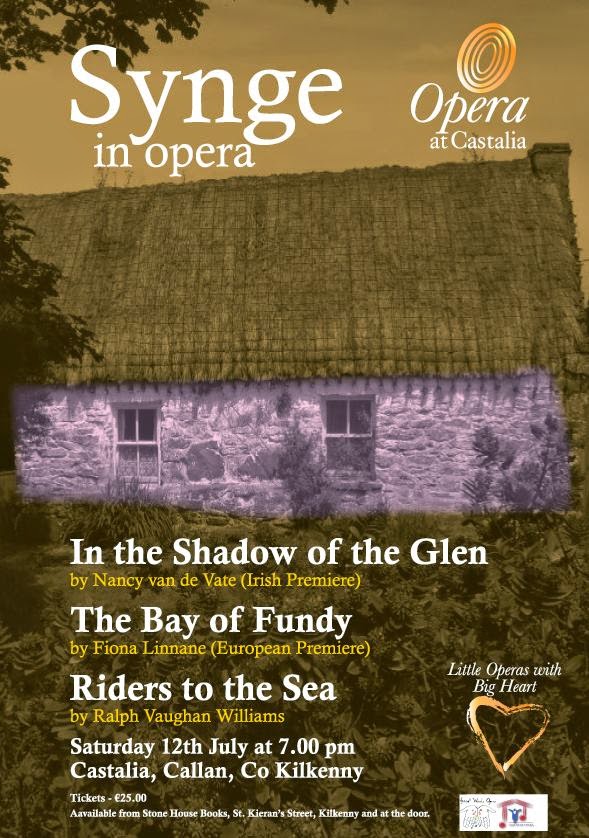 A google search of 'Irish plays turned into opera' was the starting point for this year's  programme of Opera at Castalia, Alan O Conchubhair explained to the audience at the concert hall located deep in the heart of rural Kilkenny. More specifically, the theme was Synge in Opera form,  the playwright at the vanguard of the  Gaelic Revival. The experience proved to be a convivial evening of chamber opera and chat as for a third successive year short contemporary and 20th century  work was presented by O Conchubhair and Brendan Mills at the Camphill Campus at Ballytobin. The operas were presented in a semi staged format with the furniture of a cottage dwelling and the obligatory sacred heart picture on the dresser.

Two settings of plays by JM Synge were separated by a short humourous piece by Fiona Linnane.  Both Fiona Linnane and Nancy van de Vate,  were in the house to hear their 'black dots turned into sounds' for an audience that included several luminaries of the Irish new music scene'.  Both ladies spoke a little about the genesis of their pieces.  The cast were predominantly young artists in training in various third level colleges with some star stalwarts.

The most substantial piece was Mid West Opera's production of Riders to the Sea by Ralph Vaughan Williams. I so  rarely  hear a contralto voice and Sarah Ellen Murphy,  was terrific in conveying overwhelming sorrow and grief as Maurya who loses everything to the cruel sea.  I was impressed with newcomer baritone Sean Boylan and soprano Rebecca Rodgers had a notable dramatic instinct for getting her lines across as Kathleen. Michael Young at piano gave the most sympathetic accompaniment of the evening particularly lovely in the final choral 'keening' element of the play as young Bartley is waked.

The other Synge play, In the Shadow of the Glen was in a style of extended recitative for  a vocal quartet with occasional  spoken lines. Perhaps it was this element that  reinforced my ambivalence about the play working  as an opera libretto. The insubstantial plot  needed more nuance  than the opera format could deliver. The most dramatic dramatic singing came from tenor Andrew Gavin as Daniel Burke.   This is just the second time the opera has been performed and it added much to the occasion  to have the composer in attendence who clearly was delighted with hearing the work for only a second  time after a gap of decades. Originally from New Jersey , Nancy van de Vate is  domiciled and much lauded after a long and successful career, in Vienna. The composer had some some  sensible and succinctly expressed things to say about the chamber opera genre, most memorable of which  her rhetorical question 'you don't need 500 ladies in ball gowns to make an opera, right?' Of course right.

In between, Sandra Oman demonstrated yet again what a fine comic performer she is  in an extended  aria in Fiona Linnanes' piece, The Bay of Fundy a sort of Bridget Jones diary style sung monologue.

My impression was that the intention was to stage the operas outdoors in the super amphitheatre space. However, with the threat of rain, the action was moved indoors to the hall, an unusual high ceilinged octagonal space. The generous intervals allowed plenty of time to chat to the other patrons. We met composer Eric Sweeney who was fully recovered after the exertions of


bringing his new opera to stage. Writer Michael Fewer told me about  his exciting new travel writing project which takes him far from Waterford's, cliff and shore to Portugal. Keith Pascoe of the Van Brugh String Quartet told me about his favourite continental music festival  and Gerry Murphy  just back from guiding  music lovers around the Schumann trail filled me in on his exciting new composition projects. More on these pages in due course. Sean Boylan, legendary football manager and his wife Tina were in the house to support their eldest Sean Óg and also making the trip from Dunboyne, Co.Meath were Rebecca Rodgers' parents all very proud and justly so. Bravo tutti!

House notes. Finding this venue is tricky. Getting lost going or coming was a common topic cropping up in conversation. Signposting is not good. Be aware that there are two Camphill Campuses. You want the Ballytobin one- not the nearby Kyle one. Can I suggest concert organisers post a volunteer at the car park to guide patrons to the right building. The way is not obvious and not clearly marked. We spent ten minutes trying to find the concert hall.

Posted by Cathy Desmond at 3:31 PM