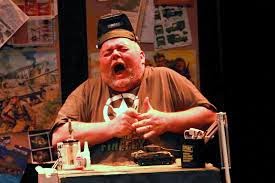 Bewleys Café Theatre : Climb the stairs to the second floor of Bewleys Cafe on Grafton Street and you'll find this gem of a theatre space.There is usually a production scheduled daily at around a tenor. This week Pat McGrath appeared in a one man show of his own devising. Small Plastic Wars was a bittersweet story of one man's story of coping with unemployment by escaping into a more easily controlled world of model making. This didn't sound compelling but I was drawn in  and  it held my attention over the hour or so duration. It was unfortunate that the amplified buskers struck up on the street outside  distracting somewhat from the delivery of the final lines.

Perusing Pictures at the National Gallery.

There is a rolling programme of documentaries and lectures at the National Gallery. I watched an excellent BBC documentary High Art in Lowlands presented by Andrew Graham Dixon and felt rather better informed about Mondrian, Van Gogh, Magritte and Delvaux and the various art movements in the Netherlands. There are talks daily on some aspect of the collections. On Friday, Sarah lead us through a dozen of Jack B Yeats' works in chronological order. I was interested to learn that Olympic medals were awarded for painting in the 1920's. Yeats won silver for the Liffey Swim . Fancy that!

No Go zone in Grafton Street
Whatever is going on in Grafton Street. Roadworks, bare torso-ed guitar strumming buskers, collectives  of sinister statues and a proliferation of microphones made the 'premier' shopping street  a somewhat oppressive place to be. A report by another observer on the situation here http://dublindailyphotos.com/2013/08/05/new-laws-for-dublin-street-buskers-and-performers/
Dublin City Council needs to get  a grip on this if they want to preserve a chic ambiance in this hub of commercial activity. 'A Wonderland' it most certainly was not! 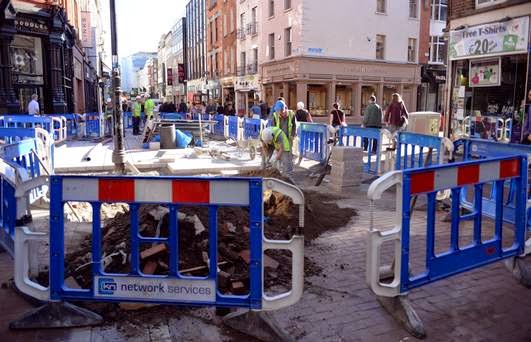 Posted by Cathy Desmond at 5:21 PM