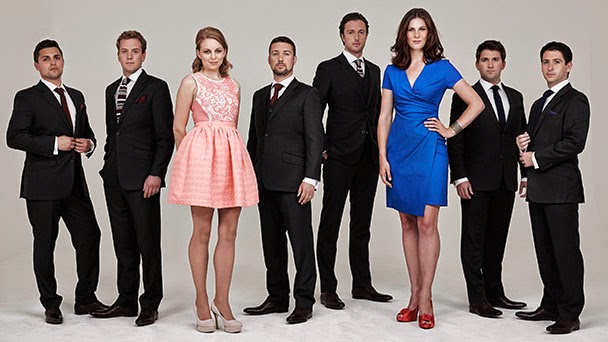 
The British vocal ensemble, Voces8 arrived at Christchurch Cathedral, Waterford last night hotfoot  from a headline gala concert at Cork Choral Festival. This was enough of an imprimatur to expect something good. But  they weren't just good. From start to finish, they were superb.
Beginning with  British and Italian Renaissance music, the group of six men and two women,   presented a diverse choral cocktail mixing  cool  jazz numbers with a soupçon of classy  pop and a measure  of 20th century minimalism all presented with a refreshing dash of theatricality. There were no programme notes (tut tut) but all pieces were clearly announced without the aid of amplification  in well modulated, crisp tones by various members, a master class in how to address the audience beyond the first three rows.  We loved also  the interstitial moments of absolute silence after the pitch pipes had been blown. If we were forced to choose a highlight, their rendition of a Beatles number, Free as a Bird, an homage to the King's Singers   was so beguiling  that a  general murmur of approval was audible across the pews.

Indicative of their eagerness to connect with their audience was  a remark on the elegant crystal chandeliers, (the presenter said that they reminded the group of their time as choristers in Westminster Abbey),   I was reminded again of the reservoir of musical expertise in the English Cathedral Choral tradition.   Following the concert, the octet  moved from the platform to the front of the  house to meet and greet.. I left the cathedral to the sound of lively  chatter as  each of the eight had scattered  and been subsumed by listeners. A trip to their summer school in South West England  is not too far away and might interest some choristers.  A preview of their latest recording for the Decca label is posted below.

Venue Notes Dean Jansson of Christchurch,  remarked in her introduction that there were 30 choirs active in the county.  With such a busy scene, one might have expected the attendance to have been  fuller than it was last night for one of just two performances in Ireland by this group. It was unfortunate that one of the choirs had a concert on the evening so presumably members of the other 29 choirs were either at Cork Choral Festival or  in the pews in Ballygunner to support Ad Hoc Chorale. I am on the circulation list  of several musical ensembles including a choir in Waterford. I received no notification  via these lists that this event was happening.

Who we met. We met tenor, Dermot Doyle of Concordia who tells me the male voice quartet,  will be back in action in September. No lull in the performing schedule however for Bealtaine. Choir. Their director, Anne Woodworth tells me that they have no less than  five events scheduled for May..