A Lovely War! in Waterford 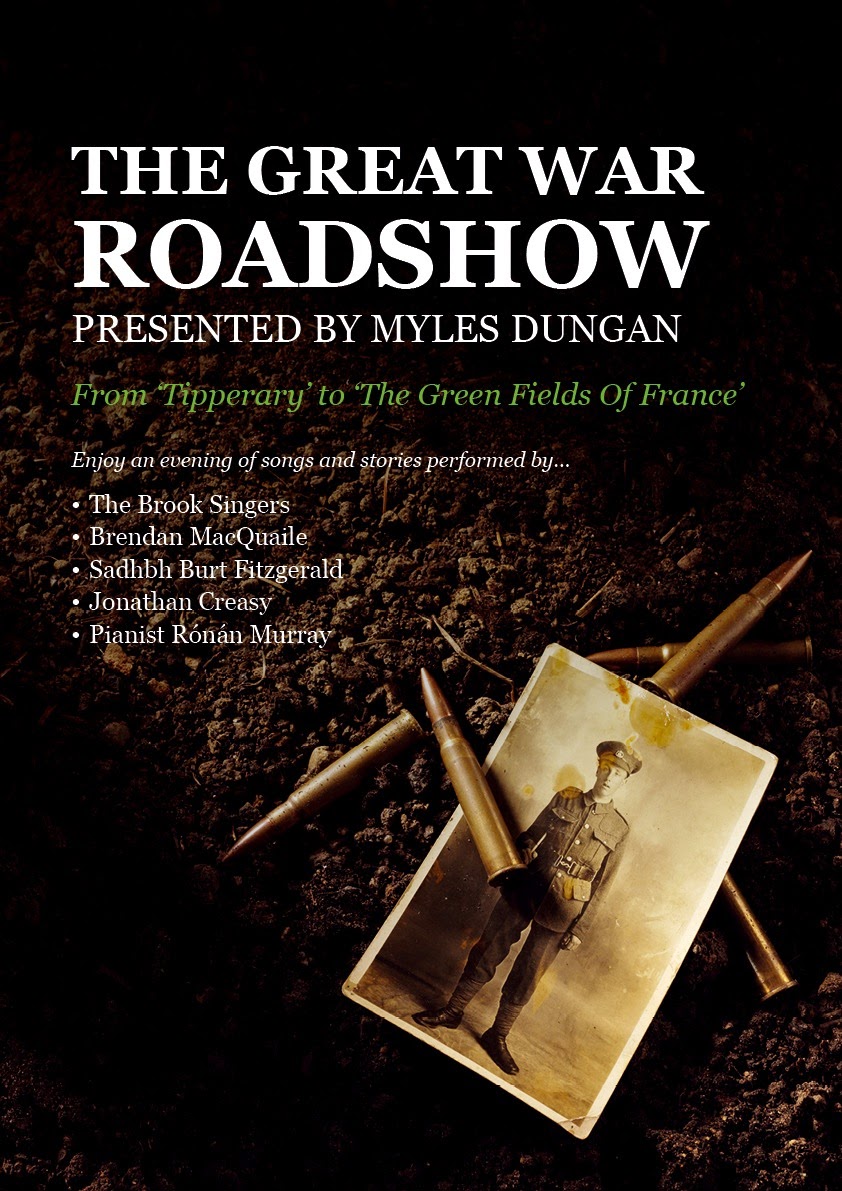 The Great War Roadshow made it's first stop at the Theatre Royal, Waterford  last night with an evening of songs and stories  based on the theme of World War 1. Deriving it's title from Joan Littlewood's iconic 1960's musical, the show was a cocktail of elements that for the most part made for an entertaining and thought provoking  evening at the theatre  Historian, Myles Dungan set the context with snippets on the provenance of the  songs and the ghastly war statistics with the consummate ease familiar to listeners to his broadcasts on RTE's, The History Show.  A male voice octet,  The Brooks Singers and female vocalist, Sadhbh Burt Fitzgerald accompanied by pianist, Rónán Murray delivered the  jaunty morale boosters and sentimental  songs in a comfortable understated style. The device of the presenter engaging with the spirit of dead infantryman, Lar worked well and Brendan McQuaile moved  from saucy songs to poignant monologue with aplomb, particularly in the retelling of the legendary Christmas truce in part two. The addition of a  strummed guitar accompaniment however broke the spell of the WW1  period soundscape. particularly in Act 1 with a John McCormack standard, It's a Long Long Trail being given a bland 70's  folk treatment.

Given that most of the repertoire is a century old, it was extraordinary how familiar most of the songs were to us. 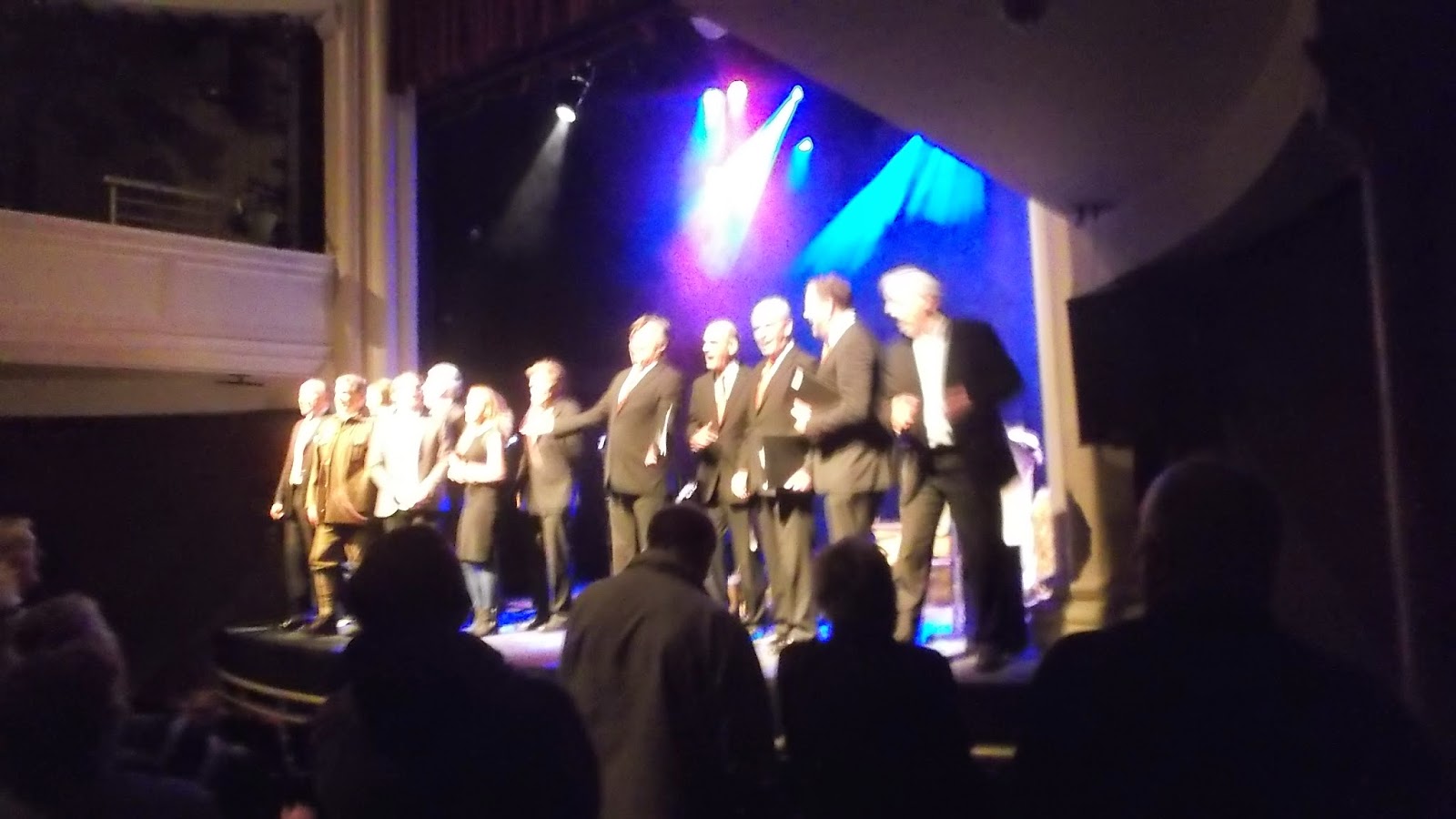 The programme contained comprehensive notes on the material.. The emphasis was on the songs and stories but there was a snatch of Sassoon' poetry. I was reminded of the war poems of  Ledwidge from Slane. I recalled an event in Clare when broadcaster John Quinn evoked the powerful image of Ledwidge, stationed at the front, receiving his first published work in the post. The emblematic death of  John Condon, one of  the war's youngest fatalities, from Waterford was acknowledged in  a song from the Boys of the Island, a recent album of retrospective war songs. It was good to hear the less familiar song of Eric Bogle's trilogy, All the Fine Young Men.

There was resonance with the  'Good Old Days' music hall aura of the Victorian theatre space in the final sing along when the audience were invited to join in a 'spontaneous quodlibet' of war ditties.  This was a decent effort at delving into the  music cabinet of war and shedding light on the conflicting emotions contained between the sheets. I am happy to report that  there was well deserved standing ovation from the stalls audience on the first night of the tour. We look forward to the lecture series which comes to Waterford Central Library later this month with a distinguished panel of speakers .

Your King and Your Country Needs You
Bombed Last Night
Goodbyee
It's a Long Way to Tipp
If You Were the Only Girl in the World
Mdmoiselle from Armentieres
Keep the Home Fires Burning
There's a Long Long Trail
Oh It's a Lovely War
Pack Up Your Troubles
Over There
French Medley  I Don't Want to Be a Soldier;  Hush Here Comes a WhizzBang; I Wore a Tunic; Forward Joe Soap's Army ;When this Lousy War is Over
Part 2
Roses of Picardie
Trees
The Recruiting Sergeant
Salonika
We'd Never Tell Them
Silent Night (Christmas 1915)
The Green Fields of France Eric Bogle
The Rose of No Mans Land
All the Fine  Young MenBogle