Immersed with The Drowned Man in Paddington 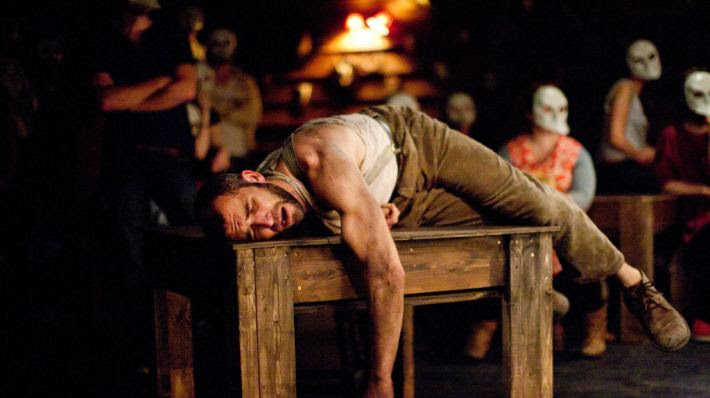 Here's the deal: You turn up at a disused 19th century postal warehouse in Paddington in West London. You hand over your ticket, you put on a mask the same as all the other attendees. You  cautiously enter a darkened corridor. You enter a lift where a creepy guy, in character, briefs you on the plot line Then, for three hours you wander amongst a series of large spaces and observe a series of mis-matched scenes played out by actors who pop up all over the place. All this in a set jammed with superb 1960's americana.

Not your average night at the theatre. This is what they call immersion theatre and this production was delivered by the Royal National Theatre and Punchdrunk

Drowned Man - A Hollywood Fable tells the tale  of the movie business the actors, the starlets, the femme fatale, the wannabees, the supporting cast. Along the way, there's a couple of murders, drug-taking, a detox, a cabaret etc, etc. The key thing about the show is everybody's experience is different. It's all
conducted in semi-darknessss. the actors say their piece and then dash away. Do you follow them or stay in your spot? This approach means you're quickly separated from your companions.
In the plot, I understand that there are two key murders in  Temple Studios. I only saw one. But does it matter? I'm not so sure as I was inevitably following other action. The succession of scenes are dramatic and the anonymous audience is right in the mix. Actors barge you out the way to get to their spots. Documents are exchanged and you get the chance to read them as the actors do. You follow a character to another scene but get distracted by a more attractive scene.

The production is directed and wonderfully choreographed by Felix Barrett and Maxine Doyle.

I thought it was wonderful and will have to return to see that other murder!

Posted by Cathy Desmond at 2:21 PM