I enjoyed working with students at the annual Summer Music on the Shannon course held in Ennis last week. For the Friday lunchtime concert the group including  Elaine Kenny, Cork based violist and Bogdan Sofei  of the Contempo Quartet presented some pieces. Our selection was Ah vous dirai je maman, Ode to Joy and, Song from the Shetland Isles. The  group included two sets of siblings , Anna and Miriam Quin and Elizabeth and Leon Costa de Beau Regard. I am very proud of Eimear O Tuathail and Laura Copeland piano students who made their debut on cello and bass at the event.

We were preceded by a splendid brass fanfare.

Later in the evening I heard the festival production of The Green Children by Nicola Le Fanu. and Kevin Crossley-Holland. Director Airlee Scott coaxed fine  performances from the young ensemble of twenty or so voices. Particularly impressive were Orlaith Wallace as Lady Alice and Emily Luff as the Green Girl. The tableau in costumes by Monica Hannaford evoked a scene from a Bruegel painting and I specially liked the maypole unfurled by the costume mistress herself. The show incorporated a number of project scenes where the cast devised their own lyrics and these were very charming.  A chamber ensemble added colour but never overwhelmed the young voices. Percussionist, Pete Mitchell, a student at the Royal Northern College of Music added all manner of bells and whistles to the sound palette.   I found it extraordinary that although I don't think there was any amplification I could hear most of the words quite clearly . Well done. Charming! 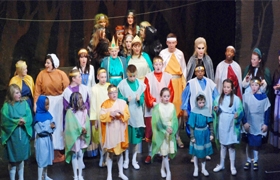 Posted by Cathy Desmond at 6:48 PM