On the Razzle at Garter Lane 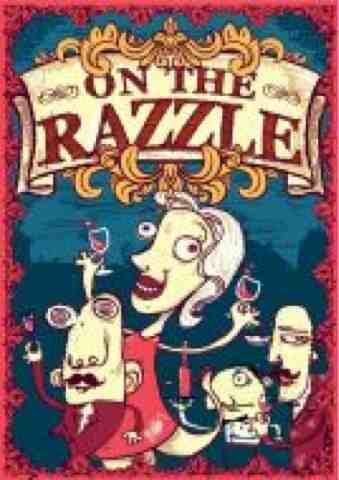 Garter Lane Arts centre in Waterford city bring On the Razzle to the stage for a fortnight as part of their summer season .  There was much to enjoy in this in house  production of a Tom Stoppard play directed by Jim Nolan and superlatives were flying about the capacity house at opening night as patrons and punters enjoyed the sugar rush of the sweetest  of theatrical confections  after some more sombre fare earlier in the season.
Here are my top ten reasons why I recommend you go.

1 Huge Cast A cast of dozens; which in this minimalist  era of pared down casts and  of one man shows is a cause for celebration if nothing else. Supporting the excellent leads, there are loads of cameo roles. Paul Dillon as the German Man made the most of his one line.

2 The Script Tom Stoppard's witty word play.`I was amazed to discover that this quintessentially British writer was Czech born and English is presumably not his mother tongue. The witticisms, malapropisms puns and double entendres in this screwball farce come so quick and fast that you can't catch all of them. 'I shan't feel married til I've had the consommé'  'He'll alter you before dessert - he'll desert you before the altar, just two that come to mind. Much of the humour is in the main character's attempts to correct his linguistic errors maybe a relic of Stoppards own journey in language aquisition.

3 A real live brass band : A sextet of brass instruments courtesy of Waterford City Brass add a luxury element to the panoply of sound effects a la La Boheme here . My only complaint is having assembled such a resource, they might employed them to play some final bows/ exit music while they were there at all.

4 The Pipes And if cornets and euphoniums weren't enough, to top it all a bagpiper, John Stone appears in the cafe scene for a birthday surprise.

5 The Set design by John O Donoghue makes the Garter Lane stage feel like Covent Garden  with a complex plot evolving on several levels .  With one caveat , Vienna was not quite the gaudy carnival I expected with a distinction between scene one shop set and scene three Vienna street set not clearly marked.

6 Choreography.  Not too much  dancing as such but the choreography  by Libby Seward of the Imperial Cafe waiters scene was beautifully done.

7 The Acting : What a feat of memory the main roles were. Gerry Kane was hilarious as pompous word mangling merchant Zangler. Hugo O'Donovan plays  his chief sales assistant with a manic intensity, that left me a bit frazzled sitting in the front row. Vickie Dunphy as his side kick, Christopher was all wide eyed innocence. Damien McDonnell was terrific as the wily, devil may care servant Melchior . Denise Quinn played  Miss Blumenblatt with a Wildean flourish.
Other notable parts were a randy coachman , Padraig O Griofa, French maid Anita O Keeffe and Nick Bankes as a Belgian Foreigner, Rob Doherty and Ema Lemon as the lovers, Vivienne Coughlan as Madame Knorr and Lorraine Murphy as Frau Fischer, Clare Smith was the put upon maid.

8 The Venue : Garter Lane has very comfortable solid seats, with a steep enough rake to allow a great view from every seat.  the sort that don't creak and move when your neighbour crosses their legs.

9 The costumes : There was no  feeling of scrimping in the gorgeous 19th century, fin the siecle  costumes from NoMac

10 The Horse of Course: How could we not love a production with brass band and a pantomime horse. This one was worthy of Flann O Brien with the horse being part bicycle.

On the Razzle runs at Garter Lane until June 22nd 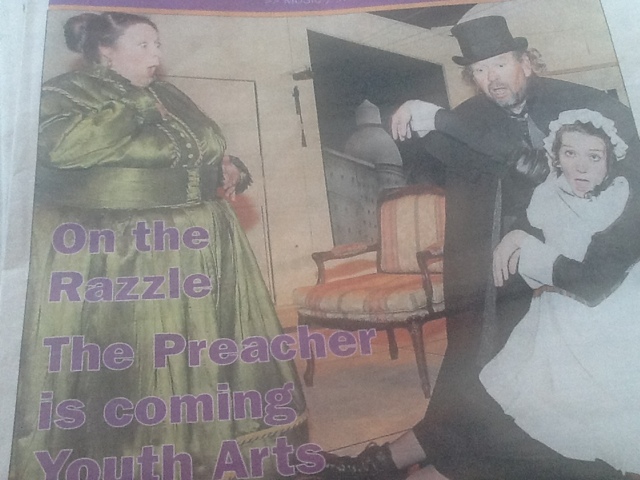