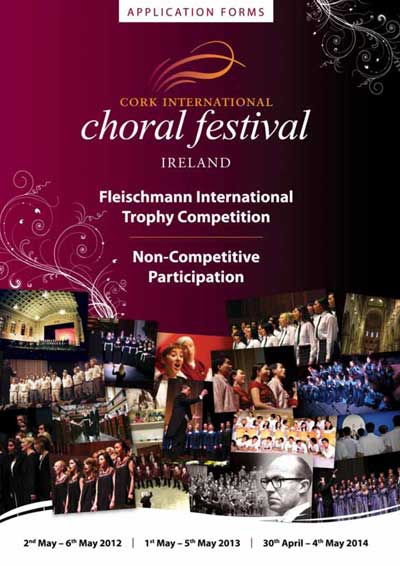 What a Sisyphusian task directors of school choirs undertake.  No sooner than they have rolled the metaphorical boulder up the hill and achieved their task of moulding their young charges and and coaxed   gorgeous sounds out of them, the ungrateful so and sos leave to pursue other avenues and they must begin all over again with a bunch of new recruits. I met  , Björn Johansson from Sweden  conductor of fine Vocal Ensemble of Risbergska High School and  he remarked that although he had visited Cork International Choral Festival  several times in recent years, his current choir were all entirely new to the festival.  They were just one of 100 or so choirs with a staggering 5000 participants  visiting Cork for the annual singfest in the Leeside city .


I arrived at City Hall, Cork  in the midst of festival fever  in time to hear the afternoon segment of the post primary schools' competition on Thursday. The large space looked surprisingly intimate with the house lights dimmed in the auditorium. There is something about the sight of all those assembled earnest  young faces singing as one , that I find very moving and gives me hope and cheer for the future. How wonderful to see Ben O Hanlon lead his splendid De La Salle Waterford boys' choir, sadly one of a only a handful of all male  choirs in the schools' competition. But my highlight of the day was seeing and hearing the 100+ strong Colaiste Muire Choir from Ennis led by conductor Carmel Griffin.  'Is there a schoolgirl left in Ennis today?' a patron remarked as the enormous choir, twice the size of any other ensemble took to the stage, a logistical feat in itself.  Singing a modern work by Rhona Clarke and  The Blue Bird by Stanford , the choir were simply sublime.  In some ways, young choirs achieve a form of perfection that young instrumental ensembles rarely do, their artlessness adding rather than detracting from their renditions.  Judge Shane Brennan,  in his summing up expressed a wish that the participants would continue to raise their voices in song when the left schooldays behind them. Hear, Hear!


Later in the evening, a packed Opera House lapped up the stylish  close harmonies of the all male sextet, The King's Singers . Sadly I missed the first set but I caught the second which consisted of lighter fare of pop and folk song arrangements and opened with a long humorous pastiche piece by Paul Drayton  It was a bit like being offered a gorgeous pudding when really you're in the mood for steak and chips. In our overamplified era of concert experiences, it is cheering to see a large auditorium  in thrall to a small ensemble of unamplified accappella voices. Amongst the afficionados, were many  movers and shakers on the local and national music scene.  It was a good week for Cork Opera House with Ballet Ireland  attracting a very good house on Monday night to their minimalist production of Romeo and Juliet .


Cork streets abounded with buskers not particularly part of the festival but no doubt drawn by the buzz in the city.  My favourite was Damien Guilfoyle playing a real honky tonk piano on the corner of Caroline Street . It is not often you hear Beethoven followed by Boogie Woogie. Have a listen to him on the audioboo. 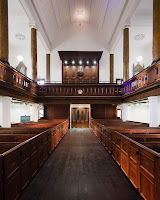 The Triskel Arts Centre is a elegant ecclesiastical space with a stunning interior just a year into operation as a live music venue and it was packed on Friday for a free lunchtime performance by   Ensemble Vocal, just one of many free events in venues all over the city during  the course of the festival. Later in the day, The National Chamber Choir, one of a very few professional vocal ensembles in Ireland  attracted a good following to St Finbarres' Cathedral for a highbrow choral event featuring a premiere of the winning entry of the Sean O Riada Composition Competition, Two Unholy Haikus by Frank Corcoran among other contemorary Irish works.

Outside the main events, my sources tell me that great fun was had at the late night sing songs  around the lobby piano at Festival Club in The Clarion Hotel with ceili dancing lessons in the generous foyer space as part of the informal cultural exchange.  My brothers appeared  at the more informal Atrium sessions as members of community choir, Voices of Cork and jolly good they were too!
You would have to be delighted for the first prizewinner of the Fleischmann Prize, Ateneo Glee Club, all the way from Manila in the Phillippines .   Check out their festival performance here . Forget your sombre black and white , these  are  what I call  costumes.