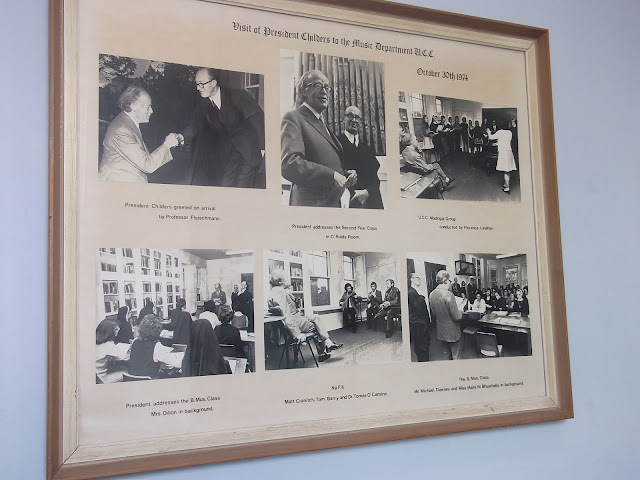 As part of his college studies, my son was asked to research German influence on Irish society by an individual and I prepared some notes on a former professor of music at UCC, Aloys Fleischmann. Although born of German musical parents in Bavaria, Aloys Fleischmann was raised in Ireland as his father, also Aloys was one of a band of 50 or so church musicians brought to Ireland to invigorate Catholic liturgical music in Ireland. I met Prof. Fleischmann when I played with the Cork Symphony Orchestra

from 1988 to 1990 and these are my personal memories of this remarkable musician.

orchestra would assemble in a school hall somewhere on the outskirts

of Cork. I was alway surprised and impressed that he undertook this

this ensemble , and not merely waving the baton.


On arrival, Professor would greet me warmly, partly because he

mistook me for a viola player with a similar name and as always, this

instrument was in short supply . This had a strong influence on my

Cork Symphony Orchestra to benefit from the extension of my string

playing skills, but to my benefit and I remain grateful to him for

the encouragement in this direction. Professor would don a short brown

orchestra, which in an age of increasing informality, I liked. He was an unusual combination of highbrow and ordinary chap.


At the close of the rehearsal, two more burly members were required to push start his

battered car to get him on the road home. In my memory this was a more

frequent occurrence than perhaps it actually was .

Vehemence, Vigour which I think this is a good summary of this remarkable character.

It was followed by a performance of his work by Voices of Limerick and a convivial reception in the staff room. It was a lovely occasion attended by three of his

daughters and former associates of his at UCC .

My guest was Anne Considine who was a student of Fleischmann's mother, Tilly. herself a concert pianist

the influence of these European maestros like de Regge in Clare,

Fleischmann senior in Cork and Bewerunge in Kildare. Much poorer, I