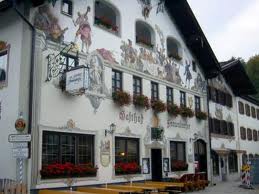 I spent a few days over the Easter holidays in the Bavarian town of Garmisch Partenkirchen . The resort was in  a transition phase with most of the ski lifts closed and  while cafes and restaurants were beginning to set up their  gardens for al fresco dining the weather was too inclement for  outdoor coffee and kuchen.

A short train journey on the excellent and inexpensive Bavarian rail network will bring you in one direction to Mittenwald , home of Klotz who introduced the tradition of Italian stringed instrument making to the region . One of the town houses houses a museum dedicated to the craft (closed on Mondays).   A short ride in the other direction towards Munich brings you to the town of Murnau and I spent a very pleasant afternoon if rainy afternoon here . 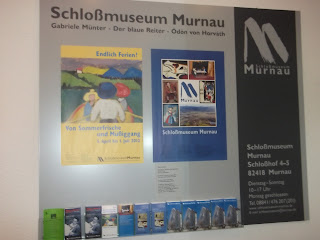 There is a pedestrian area with a choice of cafes and I had a Gateau Agnes Bernauer in Konditorei Kronner to fortify me before tackling the Schloss Museum . The gallery was busy with holiday makers sheltering from the rain . There was  a special exhibit cheerfully titled Endlich Ferien featuring  a collection of paintings and old photographs associated with this lakeside resort. Sun drenched boating scenes , girls in their summer cloths and local boy Kandinsky digging his garden were among the exhibits. The real surprise of the visit however was in the permanent exhibition on the top floor dedicated to Gabrielle Munther. I was not familiar with this artist , a consort and student of Kandinsky and thankfully the accompanying notes were rpovided in English .  The German Expressionist artist led a remarkably unrestricted and most unusual  life travelling all over Europe and to the States including  a long spell in Scandinavia around 1910 before returning to settle in Murnau where she died fifty years ago in 1962. The paintings were very attractive and included still life of domestic scenes and local landscapes.

'Cool Art ' on the walls of the Murnau Civic Centre 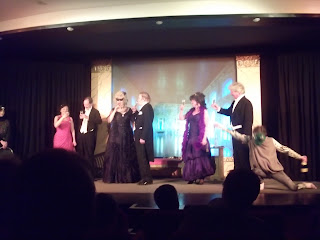 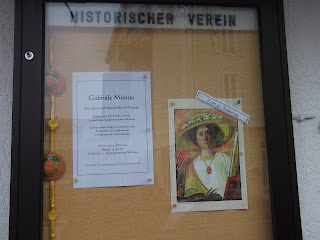 We went along to the Kleines Theatre for a production of the Stauss classic operetta, Die Fledermaus. While some of the voices were a little uneven, the performances were given with great gusto and good humour  and Rosalinde particularly commanded the stage in an impressive manner. The sprechstimme syle of the Rosalinde's lover, Alfred, a  singing teacher brought a comic nuance to the role that was hilarious and would have been sufficient to persuade us to stay for the second half were it not for one aspect of the production.   The abscence of a piano didn't augur well and indeed the production lacked any live accompaniment and while I can understand  and sympathise with the budget constraints on small  companies , the backing tracks used were very unappealing, sounding as if they were produced by strangled accordions rather than any real instrument.  Could we really be in the summer retreat of one  Richard Strauss , one of the pillars of the Romantic music  and in  the country of  the giants of Western classical music tradition. A good student pianist would have been infinitely preferable and being a not inconsiderable proportion of the audience we quietly left.

Posted by Cathy Desmond at 1:10 PM