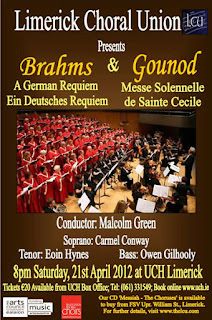 'Blessed are they who mourn for they shall be comforted' .

The liturgical ritual of farewell  has provided the spur for some of the most highly charged and emotional works in the canon and there was a rare opportunity to hear one of the apotheosis of the form by one of the masters of the German Romantic tradition  at University Concert Hall  on Saturday night when Limerick Choral Union dedicated  a performance of Brahm's German Requiem to  members of the choir who have passed away. Sung in the original German, this dramatic setting of the Lutheran text has logistical and practical challenges  being the longest of Brahms works clocking in at about an hour and opportunities to hear it are infrequent.  By coincidence, the work was also performed in the National Concert Hall by the NSO and the RTE Philharmonic Choir the previous evening. The broadcast included an overview of the form in an insightful interval talk by David Vivian Russell  Lyric Concert Friday 20th April


Russell refers to the emphasis in the German Requiem being more on consolation of the living rather than the fate of the dead  and what music of consolation is the fifth movement.  Notoriously difficult for the soloist, the lyric from John's Gospel  was beautifully and effortlessly delivered by soprano Carmel Conway.  Baritone Owen Gilhooly's third movement dialogue with the choir was vigorous yet  smooth ending in a magnificent song of hope and joy.
There was a good house for this  Easter concert with  many family , friends , former members and afficionados in the audience for the programme which included the Italianate Mass for St Cecelia featuring young tenor Eoin Hynes as a complement  to the more substantial German fare.  Among the audience were David Howes,  grandson  and son of  anchor members Harry and  Michael .  David, a Masters student at DIT had earlier in the day been awarded the Todd Cup for oratorio at Feile Liminí with a bass aria from Judas Maccabeus  as had his grandfather 40 years previously. The family were remembering specially  the late Muriel Howes, a  former LCU member who sang with the choir when they last performed the work in 2004.

Although no aspect of the classical music scene made it into a two page article in the Irish Times  covering Limerick's music scene recently, this was a huge musical  endeavour involving something in the region of 200 people in a  performance no less deserving of acknowledgement and recognition in the national press. As a musician, opportunities to play such great repertoire are so welcome and it was a  thrilling musical experience to savour from the middle of the 50 strong orchestra

Letter to the editor. Irish Times :Limerick's Music Scene
A Christmas Baroque Gala
A Handel for the President