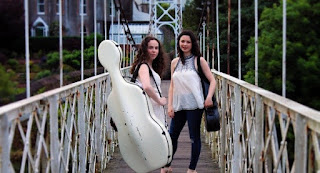 I interviewed a young  Irish violinist. Patrick Rafter from Kilkenny ahead of his return to Ireland for engagements at the Ortús Festival. The feature appeared in the Irish Examiner. https://www.irishexaminer.com/breakingnews/lifestyle/culture/the-cat-and-the-fiddle-gifted-irish-violinist-to-join-vengerov-in-national-concert-hall-905948.html

I traveled to Cork for the final recital in the weekend festival programmed by Sinead O Halloran and Mairéad Hickey. Despite being a rain sodden afternoon, there was a good crowd in the Curtis Auditorium on Union Quay for an interesting programme of work not often heard. I enjoyed L'Histoire du Soldat Suite by Stravinsky. Francis Humphrey's programme notes were full of detail about the work and the background of Stravinsky's travails during WW. The original plan for a seven piece band plus actors was slimmed down to a trio as musicians were laid low with the flu epidemic. The work charts the  story of a soldier returning from the wars with a battered old violin in his knapsack and his encounters with the devil and a princess in 5 episodes. Joining Rafter were Michael McHale and Jessie Grimes on clarinet.  We heard a lovely lyrical serenade by Hans Gal for clarinet, cello and violin. Brahms Trio for Clarinet, Piano and Cello completed the programme. It was good to meet my former violin teacher, Adrian Petcu who acts as artistic advisor to the young festival. With 4 annual weekends under their belts, the festival seems to be establishing itself nicely
in the calendar. Wishing them best wishes in the next endeavours.
Posted by Cathy Desmond at 3:08 PM