On Saturday, I took a trip down to Dungarvan drawn by the Tionól Nioclás  Tóibín, an  annual weekend of events dedicated to the memory of the famous  sean nós singer who was a native of An Rinn.  I was too late for the morning workshops but I was just in time for a lecture by Brendáin O Cróinín who has just published a book  on the life and work of 18th century poet, Piaras Mac Gearailt. Mac Gearailt is best known for the song Rosc Catha na Mumhan. O Croinin read from his prepared script and the local male voice choir. Cór Fear na nDéise enlivened the event with a rousing rendition of the Munster battle song and the song Sean O Dí.  The choir formed eight years ago under director Darren O Droma  have just launched a CD of songs with instrumental accompaniments from the area (Ceolta Néata)  and I look forward to hearing it on my journeys in the coming week. 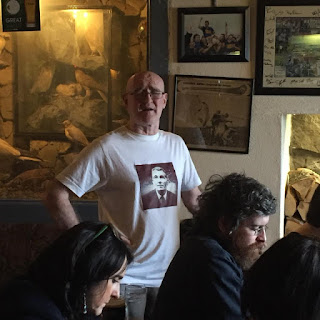 Over in Mooneys, as the the Ireland Italy rugby match was in the final moments, fidils and accordions were striking up in the two  snugs. at opposite ends of the bar.   But it was songs we were after and we made our way to  Teach Ui Muirithe in Helvick Head where singers were gathered around the hearth in true sean nos fashion and taking their turn at the request of the bean an tí.  Among the many items I enjoyed was a stirring rendition of Sliabh na mban by a gentleman bearing a Nioclas Toibin  tee shirt. I much enjoyed hearing a young man from Connemara. Concubhar o Lughasa, winner of the 2017 Corn Ui Riada, the premier sean nos singing competition. There was room for sport and music in this convivial pub in Helvick. A large photo of local hero, long distance runner John Treacy took pride of place over the fireplace and a clutch of hurling supporters watched the broadcast of the Limerick Cork game with the sound off so as not to conflict with the singers.﻿


Tempting as it was to stay for the evening events, we came back into Dungarvan where a weekend of jazz events was in full flow at Lawlor's Hotel. We caught an early evening session with a very sophisticated  quartet in the bar. Fronted by trombone player Paul Dunlea, the line up included pianist Cormac MacCarthy who I had met in Cork at a Kaleidoscope event. My piece for the Irish Examiner is here  The quartet were staying on to play for soul diva Karen Underwood for the late evening Prohibition ball. Sadly we hadn't packed our flapper dresses and a little reluctantly we left what looked like the makings of a great party night if the style in the foyer was anything to go by.

Hurrah for Music Shops: Earlier in the day I was delighted to meet  Ben O Neill in his  music shop
in Dungarvan. Ben has been in business since 1973 supplying instruments and electrical goods as well as carrying a range of recordings in all their formats from vinyl, cd and cassette. It strikes me that music shops are one of the last family retail businesses on the high street. The challenges that face these shops are similar to those that face book shops and while there has been much lamentation the closure of  Liam Ruiseal's  book shop in Cork, there is not much point in moaning about the demise if you then do your shopping on Amazon. Long may independent music shops prosper.